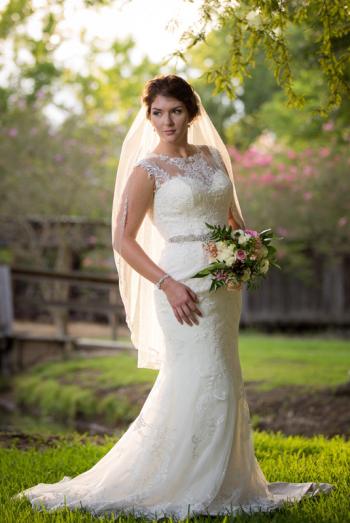 The Point-aux-Loups Springs Ballroom in Iota was the setting for the lovely evening wedding that united Emily Paige Boullion and Kaleb Jude Cormier, both of Crowley, in holy matrimony on Saturday, Oct. 3.
Rev. Jason Corder officiated the 5 p.m. ceremony.
The bride is the daughter of Janet and Glenn Boullion Jr. of Crowley. She is the granddaughter of Cecile Hollier of Grand Prairie and the late Wilfred “Lee” Hollier, and of Clarice and Glenn Boullion Sr. of Crowley.
Emily graduated from Crowley High School in 2012 before attending McNeese State University. She is presently employed at Don Shetler Chevrolet in Crowley.
The groom is the son of Nora and Jude Cormier of Crowley. His maternal grandparents are Wanda Schexnyder of Crowley and the late Norris Schexnyder. His paternal grandparents are Owen Cooper of DeRidder and the late Dorothy Fontenot of Crowley.
Kaleb, a 2012 graduate of Crowley High School, attended McNeese State University and is currently employed with Trinidad Drilling.
Given in marriage by her father, the bride was gorgeous in an ivory and champagne fit and flare gown featuring high front and back necklines and an organic-shaped trim on the edges of the sheer tulle build-up. Point d’esprit tulle peeking out from under the non-beaded lace overlay provided a vintage look, and the skirt had a scalloped trim around the entire hemline. The back of the gown was finished with a row of button-loop closures that ran from the top of the neck to the natural waistline, which was defined by a Victorian-styled crystal beaded belt.
The bride paired her gown with a scalloped finger tip veil trimmed with pearls.
She carried a hand-tied bouquet of white Ecuadorian roses, quicksand roses, statice, dusty miller and eryngium entwined with her maternal grandmother’s rosary.
In keeping with tradition, the rosary served as “something old,” while the bride’s wedding dress was “something new.” An antique blue button sewed onto the bride’s garter was “something blue.”
Olivia and Katie Boullion, sisters of the bride, shared the duties of maid of honor. Serving as bridesmaids were Kylie Garber, childhood best friend of the bride; Heather Trahan, Britney Benoit and Celena Bobbett, friends of the bride; and Taylor Cormier, sister of the groom.
The attendants wore Grecian-style floor length gowns, made by Maureen Benoit of Rayne, in sage green chiffon. Asymmetrically ruched bands accented the dresses’ deep V-necklines and attached to ruched waistbands. Soft folds of fabric fell from the shoulders of the gowns to compliment the soft flowing skirts.
They carried hand-tied mixed bouquets of antique hydrangeas, Caribbean sunset roses, eryngium, statice, limonium and dusty miller.
Nicholas Cormier, cousin of the groom, served as best man. Standing as groomsmen were Cade Abshire, Brody Deshotel, Grant Clark, Zachary Sarver and Taylor Doughty, all friends of the groom.
Abigail Boullion, sister of the bride, and Finleigh Cormier, godchild of the groom, served as flowergirls.
Cason Beers, nephew of the groom, served as ring bearer.
For her daughter’s wedding, the mother of the bride, the former Janet Hollier, selected a slate gray floor length fitted gown featuring a draped halter bodice and racer back. The neckband was accented with pearls, rhinestones and silver rochailles, and the skirt of the crepe dress flowed into a short train.
The mother of the groom, the former Nora Schexnyder, chose a goddess-style flowing gown of royal blue silk overlaid with draped chiffon. The lovely dress featured a ruched halter bodice with a keyhole accent and was embellished at the waist with rhinestones.
Both mothers carried posy bouquets of mixed white roses, statice and limonium.
Following the wedding, family and friends joined the couple for an on-site reception.
The arbor was decorated with antique hydrangeas with hints of Caribbean sunset pink, and the guest tables were topped with mercury glass votives and vases filled with flowers in the delicate colors of the wedding party.
The bride’s three-tiered cake was filled with raspberry and coconut cream and decorated with textured white buttercream icing. A string of pearls adorned the edge of each tier, and the tiers were separated by flowers matching those of the bride and her bridesmaids. It was topped with an initial “C” made of grapevines trimmed with moss and displayed on a slice of varnished oak tree trunk cut and finished by the bride’s father.
The groom’s two-tiered white cake featured butter pecan filling and chocolate buttercream icing drizzled with chocolate ganache. It was trimmed with chocolate-covered strawberries and decorated with greenery, shotgun shells and a duck to reflect the groom’s love of hunting.
On the evening prior to the wedding, Audie and Keisha Hanks, family friends of the bride and groom, hosted a rehearsal dinner for the wedding party.
The couple will reside in Crowley.