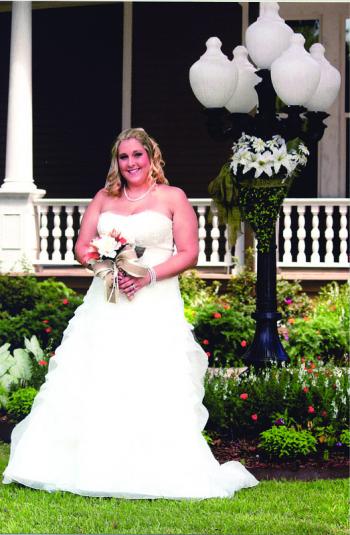 Keisha Angelle Broussard of Crowley and Randall James Bertrand of Maxie were united in holy matrimony during a double ring ceremony held on the evening of Saturday, July 18.
Rt. Rev. Jimmy Broussard officiated the 6:30 p.m. ceremony at the Knights of Columbus Hall in Crowley.
The bride is the daughter of Betty Dupre and Francis Broussard, both of Crowley. She is the granddaughter of Gloria Dupre of Crowley and the late Albert Dupre, and of the late Lorna and Fred Broussard.
The bride graduated from Iota High School before attending Louisiana Technical College. She is presently employed as a secretary with the Acadia Parish School Board.
The groom is the son of Annette and Ronnie Bertrand of Iota. His maternal grandparents are the late Totsy and Richard Reed. His paternal grandparents are the late Loucille Lacombe and the late Jeanette and Camille Bertrand.
He attended Iota High School and is currently employed with Rob’s Construction.
Escorted by her father, the bride was beautiful in a floor length ivory strapless gown featuring a slightly curved neckline and empire waist. The classic A-line skirt flowed from the waistline in ruffled organza tiers, and the back of the dress was finished with a romantic corset closure.
The bride carried a bouquet of ivory silk organza roses and orange day lilies adorned with miniature pearls and accented with brown feathers.
To ensure good luck in the marriage, she carried all of the traditional items. Her maternal grandmother’s rosary, entwined in her bouquet, served as “something old,” while her wedding dress served as “something new.” A pearl necklace belonging to her mother was “something borrowed,”
and a Miraculous Medal of the Virgin Mary was “something blue.”
Erica Broussard Deshotel, cousin of the bride, attended the bride as matron of honor. Alicia Broussard, also a cousin of the bride, served as maid of honor.
Bridal attendants were Hayley Spell and Carol Ann Broussard, sisters of the bride; Tiffany Banks, sister-in-law of the bride; Patrice Lemaire and April Leger, cousins of the bride; Jena Bertrand, sister-in-law of the groom; and Sckylier Baronet, niece of the bride.
All of the attendants were clad in chiffon gowns of different colors, with two in dark green, two in hunter orange and the rest in dark brown.
They carried mixed bouquets of cattails, rice stalks and miniature orange flowers.
Wearing an ivory chiffon dress, Cameron Baronet, daughter of the bride, served as miniature bride.
Junior attendants were Cayli and Caydance Baronet, daughters of the bride, and Lexie and Allison Bertrand, daughters of the groom. They wore cute camouflage shirts paired with ivory tutus.
The duties of best man were fulfilled by the groom’s brother, Robby Bertrand. Standing as groomspersons were Blake Deshotel, cousin of the bride; Deuce Thibodeaux and Brandon Zaunbrecher, friends of the groom; Brittany Broussard, sister of the bride; and Chris Andrepont, David Reed, Chris Reed and Blake Lormand, cousins of the groom. Landon Andrepont, nephew of the groom, served as junior groomsman.
The flower girl was Adalyn Bertrand, niece of the groom, who looked lovely in an ivory chiffon gown, and the ring bearer was Randall “Red” Bertrand Jr., son of the groom.
For her daughter’s wedding, the mother of the bride selected an A-line asymmetrical cream chiffon skirt paired with a Realtree satin tank and charmeuse lace overlay. She wore a calla lily wristlet.
The mother of the groom, the former Annette Reed, selected a black pantsuit and wore a calla lily corsage.
Following the wedding, friends and family remained at the hall to celebrate at a reception with the newlywed couple.
The hall was decorated in a rustic theme that incorporated Realtree camouflage and hunter orange.
The bride and groom enjoyed their first dance to “Somebody’s Doin’ Me Right” by Keith Whitley.
The bride’s butter pecan cake with butter cream icing was served by the bride’s godmother, Cynthia Taylor.
The groom’s cake featured camouflage icing and was topped with a deer and camouflage decorations. It was served by the groom’s aunt, Yvonne Fruge.
Out-of-town guests at the event traveled from Lake Charles, New Orleans and a variety of other points throughout Louisiana.
On the Thursday prior to the wedding, a rehearsal dinner was held at the Egan home of Robby and Jena Bertrand, brother and sister-in-law of the groom. Guests enjoyed a delicious meal of pork sausage jambalaya, corn maque choux, potato salad, deviled eggs, marinated salad, stuffed jalapenos, stuffed mushrooms and garlic bread.
Following a wedding trip to the Bahamas, the couple will reside in Maxie.