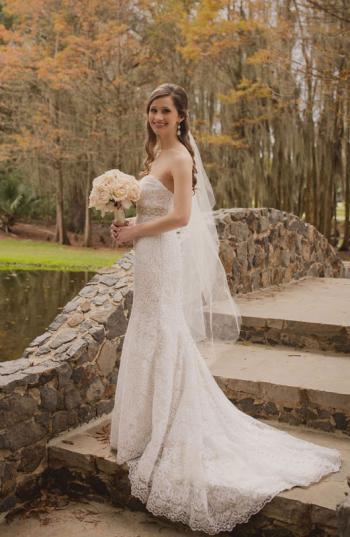 Miss Ellen Camille Broussard and Mr. Tyler James Landry were united in holy matrimony during a candlelight ceremony on Saturday, Jan. 9, at St. Mary Magdalen Catholic Church.
The ceremony was officiated by Father Brian Harrington.
The bride is the daughter of Jason and Mary Beth Broussard of Abbeville. She is the granddaughter of the late Mr. and Mrs. O.J. Choate Jr. of Abbeville and Mr. and Mrs. Jerald Lynn Broussard, also of Abbeville.
The parents of the groom are Joel and Darlene Landry of Crowley. He is the grandson of Mr. and Mrs. James Landry of Crowley and Dean Gaspard and the late Andrus “ShuNeg” Gaspard, also of Crowley.
Escorted by her father, the bride wore a beautiful strapless fit and flare gown. Soft ivory lace flowed over a café lining enhancing the romantic silhouette. Buttons and crystals trailed the back closure down to the tip of the chapel length train. The bride adorned her waist with a contoured belt encrusted with intricate silver beading, soft pearls, shimmering sequins and sparkling rhinestones. She topped her look off with an ivory fingertip length veil. She carried an elegant bouquet of vendela roses.
Miss Skylar Noel, a lifelong friend, served as the maid of honor. Bridesmaids were Celeste Broussard and Emily Broussard, both sisters of the bride, and Lauren Duhon, Angelle Domingue and Katie Robichaux, all friends of the bride. Each bridesmaid wore a floor length chiffon gown in a soft petal color. The light pink A-line dresses were accented with a sweetheart busts and sheer chiffon high necks. They each carried a nosegay of early gray roses.
Joel Landry, father of the groom, served as the best man. Groomsmen included Joey Landry and Blaine Landry, both brothers of the groom; Thomas Joseph Broussard III, brother-in-law of the bride; and Dustin Stelly and Mett Cormier, friends of the groom. Ushers were Arvie Choate, uncle of the bride, and Nicholas Choate, cousin of the bride.
Readings for the Mass were given by Rachael and Drew David, godparents of the bride. The flower girls were Grayce Landry, niece and godchild of the groom; Bella Landry, niece of the groom; Alyssa Noel, godchild of the bride; and Adelyn Rose Landry, daughter of the bride and groom.
The music was provided by vocalist Johnny Luquette accompanied by organist Tommy Guidry and trumpeter Jared Grey.
Following the ceremony a reception was held at Blacks.
On the Thursday evening prior to the ceremony, the parents of the groom hosted a rehearsal dinner at RiverFront restaurant in Abbeville.
The couple will reside in Abbeville.