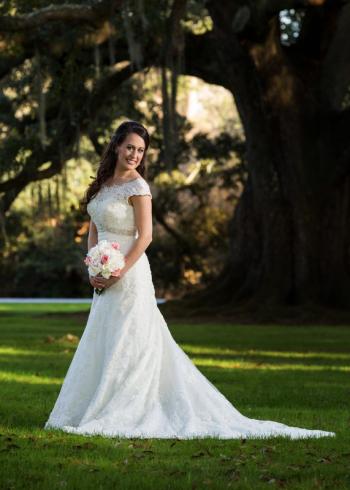 Morgan Ann Brown of Baton Rouge and Bryan Aymond Johnson of Slidell were joyously united in holy matrimony on the evening of Friday, April 17.

Morgan is a 2005 graduate of St. Edmund High School in Eunice. She attended Louisiana State University in Baton Rouge, where she earned a Bachelor of Arts degree in communication disorders in 2009, and Louisiana State University Health Sciences Center in New Orleans, where she earned a Doctor of Audiology degree in 2013. She is presently employed at Our Lady of the Lake Hearing and Balance Center in Baton Rouge.

Guests were ushered to their seats by Nicholas Anselmo, cousin of the groom, and Timothy Credeur, friend of the groom.

Music for the ceremony was provided by vocalist Naomi Broussard and trumpeter Joe Stemplewski. Selections included “Like a Seal on Your Heart” and “Where There is Love,” which were played in prelude; “Always Be a Child,” which accompanied the entrance of the couple’s mothers and grandmothers; and “The Lord is Compassionate to his People,” which was the responsorial psalm. “Jesus in Your Eyes” accompanied the offertory, “Amazing Grace” and “The Marriage Prayer” were played during Holy Communion and “Ave Maria” was the background for the couple’s presentation of flowers to Mother Mary.

The bride, escorted to the altar by her father, entered the church to the strains of a trumpet selection.

She was beautiful in a full length gown featuring an illusion bateau neckline and an empire waist defined by a jewel-encrusted belt. The gorgeous dress was overlaid in its entirety with Alençon lace and detailed with scallop edging. It was finished with an elegant V-back, romantic cloth-covered buttons and a chapel length train.

The bride paired her gown with a cathedral length lace-trimmed veil.

She carried a bouquet of white peonies, blush pink roses and patience roses with the stems wrapped in ivory double satin ribbon with an overlay of lace from her mother’s wedding dress.

They were clad in charming Mori Lee full length gowns in pale mint green. The dresses featured criss-cross V-necklines echoed by criss-cross ruching on the bodices and were finished with luxe chiffon skirts.

They were beautiful in full length ecru-colored dupioni silk dresses featuring short sleeves and round necklines. The skirts were overlaid with blush-colored silk organza, and the dresses were trimmed with matching silk organza sashes that tied in the back.

Ringbearers were Samuel James Prevost and Benjamin David Prevost, nephews of the groom. They were clad in matching natural-colored linen pants with white oxford shirts and tan suspenders.

For her daughter’s wedding, the mother of the bride, the former Vanessa Rougeau, selected a formal length amethyst-colored chantilly lace gown with a mermaid silhouette defined at the waist with a soft tulle band. The dress featured a lace appliqué overlay and sheer scoop neckline with cap sleeves.

The mother of the groom, the former Georgette Meaux, chose a two-piece peacock green silk dupioni suit. The wrap style jacket featured a portrait collar and three quarter length sleeves. Pleating at the waistline was accentuated with a family heirloom broach that had belonged to her mother, and  a slim formal length skirt completed the look.

Selected scriptures were read by Sarah Johnson Prevost, sister of the groom, and Charchelle Brown Armato, aunt and godmother of the bride.

Offertory gifts were presented by Sarah Johnson, friend of the bride, and Michelle Meaux Hopkins, aunt and godmother of the groom.

Following the wedding, family and friends joined the newlywed couple for a candlelit reception at Point-aux-Loups Springs Ballroom in Iota.

The guest tables were adorned in alternating fashion with tall glass vases of hydrangeas and curly willow and fish-bowl vases filled with white hydrangeas.

The bride’s four-tiered cake featured layers of red velvet and amaretto and was decorated with a lace embellishment matching that of the bride’s dress. It was topped with a cluster of fresh hydrangeas and served by her godmother.

The groom’s two-tiered cake was made of fudge pecan with caramel pecan filling and decorated to represent the groom’s hobbies of hunting and fishing. It also featured a Ragin’ Cajuns logo on front and was served in front of an iron gate adorned with hunting and fishing pictures of the groom from his childhood to the present.

The cake was served by his godmother.

On the evening prior to the wedding, a rehearsal dinner was hosted by the parents of the groom at The Lodge at Tee-Mamou in Basile.

Following a wedding trip to an undisclosed location, the couple will reside in Slidell.