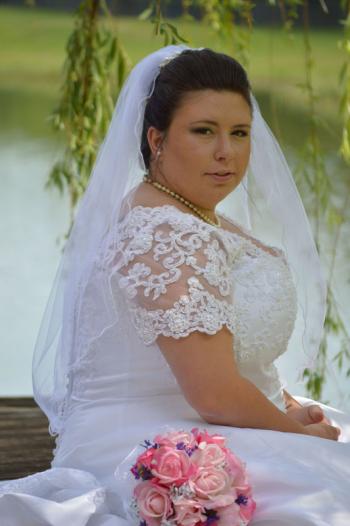 Erica Marie Cormier and Eric Paul Etheridge, both of Rayne, were joyfully united as husband and wife on the evening of Friday, May 15.
Rev. Keith Guidry celebrated the 7 p.m. Nuptial Mass in Rayne.
The bride is the daughter of Angel Nero and Gerites Cormier III, both of Rayne. Her maternal grandparents are Judy Nero of Rayne, John Leleux Sr. of Scott and the late Aron Nero. Her paternal grandparents are Gerites Cormier Jr. of Rayne and the late Marie Cormier.
Erica attended Rayne High School and is presently employed as the manager of Cormier’s Towing.
The groom is the son of Susan Thomas Etheridge and Thomas Etheridge, both of Lafayette. He is the grandson of the late Bernice and Paul Thomas of Winnfield, and of Ritsuco Nishimoto of Wildomar, California, and the late Neil Burl Etheridge Jr.
Eric graduated from Winnfield High School and is currently employed at Cormier’s Towing.
Given in marriage by her father, the bride was gorgeous in a full length peau de soie gown featuring a sweetheart neckline and Alençon lace sleeves. The back of the dress was finished with a row of fine buttons.
Erica paired her dress with a waist length veil of illusion netting affixed with a pearl headpiece, and she carried a bouquet of pink roses.
Allison Leleux, godmother of the bride, served as matron of honor. Serving as bridesmaids were Morgan Etheridge, sister of the groom; Payton Cormier and Paisley Boutte, sisters of the bride; and Kourtney Nero, Tori Nero and Tonya Taylor, cousins of the bride.
The attendants were clad in pink floor length gowns and carried pink flowers.
The groom’s father fulfilled the duties of best man. Standing as groomsmen were Neil Etheridge, brother of the groom; Dylan Cormier, brother of the bride; Ty Clark, cousin of the bride; Eric Paul Etheridge Jr., son of the groom; Maurice Benoit, friend of the couple; and Patrick Coulter, uncle of the groom.
Selected scriptures for the ceremony were read by Kaylin Nero.
For her daughter’s wedding, the mother of the bride selected an elegant tea length champagne-colored dress.
The mother of the groom chose a beautiful floor length dress in royal blue.
Following the ceremony, family and friends joined the couple for a reception at the American Legion Hall in Rayne.
The hall was decorated in a “modern country” style with burlap.
The bride’s four-tiered wedding cake was iced in white buttercream and topped with handmade roses and calla lilies.
The groom’s cake reflected his love of hunting.
Following a wedding trip to Galveston, Texas, the couple will reside in Rayne.