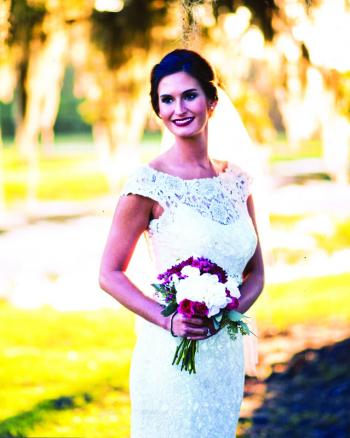 Ellyn Claire Boone and Alexander Louis Lalande, both of Branch, were united in holy matrimony on the evening of Saturday, Dec. 26, at St. Edward Church in Richard.

Ellyn is a 2011 graduate of Church Point High School and is presently a student at the University of Louisiana at Lafayette, where she is earning a bachelor’s degree in business management, with an anticipated 2016 graduation date. She is employed at Wiggins & Sons in Lafayette.

He is a 2008 graduate of Notre Dame High School of Acadia Parish and a 2012 graduate of the University of Louisiana at Lafayette, where he earned a Bachelor of Science degree in petroleum engineering. He is currently employed as a subsea field engineer with Expro.

Escorted to the altar by her father, the bride was gorgeous in an exquisite Madison James gown with a light champagne-colored satin slip dress and a delicate, intricately embroidered ivory overdress stitched with metallic thread on tulle. The gown featured a bateau neckline and a deep, plunging back adorned with an intricately designed appliqué of rhinestones and glass beads and finished with a row of satin covered buttons down the middle. A beautiful belt hand-beaded with rhinestones and pearls defined the dress at its natural waist, and an elegant sweep train with scalloped edging completed the gown.

The bride paired her gown with a matching ivory waist length veil and wore a brooch that had belonged to her late maternal great-grandmother clipped in her hair.

Ushers were Adam Leger and Andrew Valdetero, cousins of the groom.

Musical selections for the ceremony were provided by Naomi Broussard.

Following the ceremony, family and friends of the newlywed couple joined them for a reception at The Warehouse Event Center in Rayne.

The wedding cake was a sentimental replica of the cakes served by the groom’s parents and maternal grandparents at their weddings.

Prior to the ceremony, on Thursday, Dec. 17, the groom’s parents hosted a rehearsal dinner at Ruby’s Restaurant and Courtyard in Eunice.

Following a wedding trip to St. Lucia, the couple will reside in Branch.