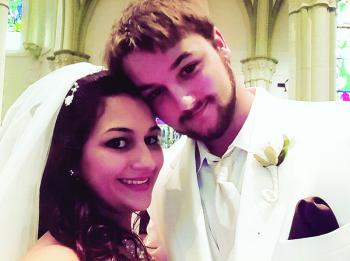 Mariah Duplechian of Jennings and Jamie Quebodeaux of Midland were joyfully united in holy matrimony during a noon ceremony held at Our Lady Help of Christians Catholic Church on Saturday, Oct. 24.
The bride is the daughter of Mike Duplechian of Jennings and Rochelle Duplechian of Houston, Texas. Her maternal grandparents are Joe E. and Sylvia Ramirez of Houston and the late Guadalupe Mejias Ramirez, and her paternal grandparents are Sammy and Margurite Duplechian of Jennings.
Mariah is a 2011 graduate of Jennings High School and a 2012 graduate of Sowela Technical Community College. She is presently employed as a Certified Nursing Assistant at the Jeff Davis Living Center.
The groom is the son of Jimmy and Patricia Quebodeaux of Midland. He is the grandson of Velma Stutes of Midland and the late Patrick Stutes, and of Johnny and Jane Quebodeaux of Crowley.
Jamie graduated from Midland High School in 2011 before attending the La. Technical College Acadian Campus. He is currently self-employed.
Given in marriage by her father, the bride was gorgeous in a white satin and organza ballgown by Oleg Cassini. Featuring a strapless sweetheart neckline and Basque waist, the full length gown was beautifully embellished with intricate bead work and embroidery and finished with a chapel length train.
Mariah carried a bouquet of magnolia blossoms and, in keeping with tradition, wore her grandmother’s jewelry as “something old” and her wedding dress as “something new.” A rosary loaned to her by her grandmother served as “something borrowed” and “something blue.”
Brittany Ramirez, sister of the bride, served as maid of honor. Bridesmaids were Jaime Doucet, friend of the bride, and Alexis Richard, niece of the bride. They carried magnolia blossom bouquets.
Blaine Monceaux, cousin of the groom, served as best man. Standing as groomsmen were Shannon Richard, brother of the groom, and Kade Richard, nephew of the groom.
Ushers were Mikey Duplechian and Ricky Salazar.
Bria Mays served as flower girl and Julius Salazar served as ring bearer.
On the evening prior to the wedding, the groom’s parents hosted a rehearsal dinner at Green’s Cafe in Jennings, where guests enjoyed chicken and sausage gumbo, potato salad and dessert.
Following their wedding, the couple enjoyed a honeymoon trip to Walt Disney World in Florida.