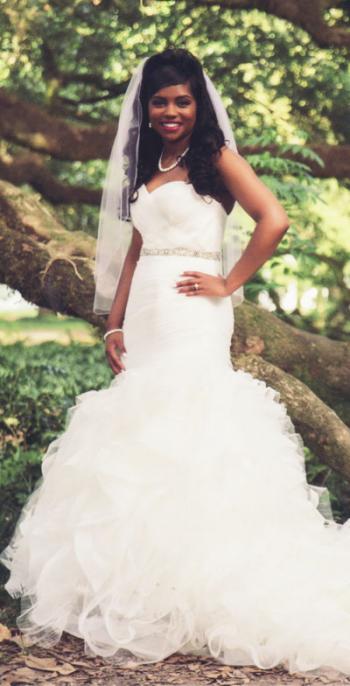 CADE - The picturesque Manor was the setting on Saturday, July 23, 2016, for a 7 p.m. wedding ceremony uniting Shamara Anjané Young and Ronalldo Djuan Coleman in marriage.
The bride is the daughter of Martin and Chandrekia Bias of Rayne. Her grandparents are Eddie Young, the late Ella Faye Young, the late Mable Morrison and the late Arthur White, all of Rayne. Shamara is a 2007 graduate of Rayne High School, 2012 graduate of Northwestern State University, and is currently employed by RJ Reynolds Tobacco Company as a territory manager.
The groom is the son of Romy Coleman of Rayne and Tromy Batiste of Dublin, Ohio. His grandparents are Ronald Coleman of Crowley, the late Maryetta Coleman, the late Virginia Batiste and the late Frank Yokum Sr. of Rayne. Ronalldo is a 2005 graduate of Rayne High School, attended Louisiana State University at Eunice, and is employed by EcoServ.
Escorted by her father, the bride wore a strapless organza wedding dress designed with a sweetheart neckline and embossed fitted bodice of tuffed layering. The natural waist was accentuated with a beaded waistband while a trumpet-styled skirt was accented with vividly ruffles and a chapel-length train. A stylish hair comb held a fingertip veil of sheer illusion to complete her attire.
The bride was attended by her best friends, Destiny Senegal and Shalyn Livings, as maids of honor.
Junior bridesmaids were Taylor Bias, sister of the bride, and Laurian Guidry, sister of the groom.
Bridal attendants each wore a floor-length Vera Wang gown of flowing black satin featuring a one-shoulder illusion neckline and ruching throughout the bodice.
Attending the groom as his best man was his cousin, Justin Jolivette.
Ushering guests were Alondrea Young, cousin of the bride, and Adajio Kanonu, brother of the groom.
Male attendants wore formal black tuxedoes with black shirt and tie. Each lapel was noted with a red rose boutonniere.
For her daughter’s wedding, the bride’s mother wore a steel gray, floor-length gown designed with an off-the-shoulder neckline composed of slim shoulder straps. A gathered detail formed the top as a luxurious brooch adorned the slim band encircling a peplum waist which flowed into a fitted slim skirt and sweeping train. She was presented a red rose corsage.
The groom’s mother selected a formal pants suit in a deep red tone, in addition to a formal black hat and lace gloves. She was presented a red rose corsage.
Immediately following the wedding ceremony, a reception was held on site in honor of the newlyweds. A vintage theme with a black and white decor was noted for the reception area.
Prior to the wedding, a rehearsal dinner was held Friday, July 22, 2016.
Following their wedding trip, the couple is now residing in Duson.