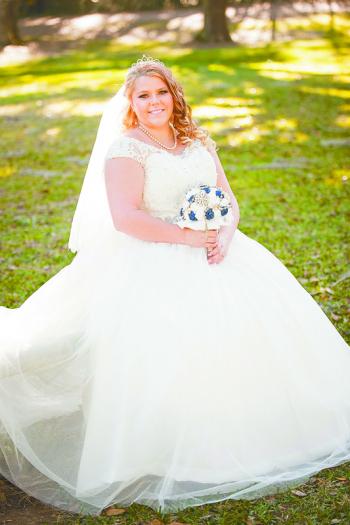 Brooklynn Paige Ritter and Dylan Joseph Romero, both of Crowley, were joyously united in holy matrimony on the evening of Saturday, March 12.
Rev. Glen Howie officiated the 5 p.m. double-ring ceremony at the International Rice Festival Building in Crowley.
The bride is the daughter of Troy and Alesha Chaisson of Crowley. She is the granddaughter of Albert Ritter of Crowley and the late Judy Ritter, the late Enes Chaisson of Marksville and the late Marie Welch of Crowley.
Brooklynn graduated from Crowley High School before earning an associate’s degree in accounting from Louisiana State University Eunice. She is presently employed at Strata Control Services, Inc.
The groom is the son of Johnathan Romero of Crowley and Jessica Comeaux of Rayne. His grandparents are Brenda Romero of Crowley and the late Arthur Romero and Mary Miller of Iota and the late Roy Miller.
He is a graduate of Crowley High School and is currently employed with Simon & Sons Interior Trim.
Given in marriage by her father, the bride was gorgeous in an ivory tulle ballgown featuring a fitted bodice adorned with scroll lace, pearls and rhinestones hand-appliqued by Annette Istre, friend of the bride, and finished with a chapel train.
She paired her gown with a two-tier ivory veil trimmed with crystals and affixed with a crystal tiara.
The bride’s unique bouquet was made of handmade navy blue and ivory peau de soie satin roses interspersed with crystal brooches and entwined with her late grandmother Ritter’s rosary.
In keeping with tradition, Brooklynn wore her late grandmother Ritter’s earrings as “something old,” while her wedding dress served as “something new.” Her late grandmother Ritter’s rosary was “something borrowed” and the roses in her bouquet were “something blue.”
Tori Fruge Dartez, cousin of the bride, served as matron of honor. Bridesmaids were Liz Cormier Vanicor, long-time friend of the bride; Angelle Stafford, high school friend of the bride; and Courtney Fontenot, soon-to-be cousin-in-law of the bride.
The bridal attendants were attired in navy blue mesh gowns in varying lengths and styles of their choosing, and they carried bouquets of blush roses.
The groom selected Devin Hebert, his cousin, to serve as best man. Serving as groomsmen were Kyle Romero, uncle of the groom; Kevin Schexneider, childhood friend of the groom; and Joshua Simon, soon-to-be cousin-in-law of the groom.
Kaylen Romero and Brayden Romero, cousins of the groom, served as flower girl and ring bearer, respectively.
For the reception, the building was decorated in a rustic chic theme with an elegant, billowing ceiling drape.
Guests enjoyed a wide variety of foods prepared by the couple’s families.
The newlyweds’ cakes were made by Wendy LaFosse, friend of the bride.
The bride’s four-tiered multi-flavored ivory cake was decorated with a pearl-accented quilt pattern and adorned with buttercream rosettes. It was graced with a bride and groom silhouette cake topper that included the couple’s American Pitbull Terrier, Diamond, and displayed before a backdrop of classic white linen draping. It was served by Amanda Brown, godmother of the bride.
The groom’s cake was decorated with duck grass camouflage and topped with a duck call and shotgun shells to reflect the groom’s love of hunting. It was displayed in front of a hunting-themed backdrop and served by Danielle Romero, godmother of the groom.
Following their wedding, the couple is residing in Crowley.