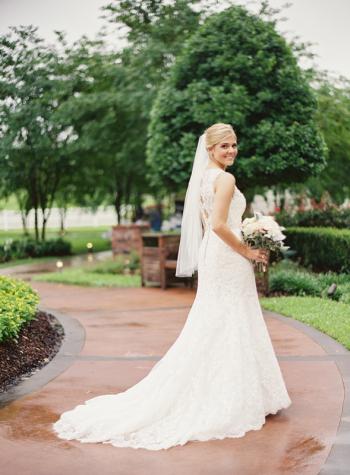 Madeline Annie Foreman of Rayne and Drake Allen Kelly of Eunice were united as husband and wife on Saturday, July 18, at St. Joseph Catholic Church in Rayne.
Rev. Kendal Faulk officiated the 6:30 p.m. nuptials.
The bride is the daughter of Mr. and Mrs. Michael David Foreman of Rayne. She is the granddaughter of the late Mr. and Mrs. James Patrick Gautreaux of Rayne and the late Mr. and Mrs. Marion Leon Foreman of Crowley.
The bride is a 2009 graduate of Notre Dame High School of Acadia Parish and earned a Bachelor of Science degree in early childhood education in 2014 from the University of Louisiana at Lafayette. She is employed as a fourth grade teacher at St. Edmund Catholic School in Eunice.
The groom is the son of Mr. and Mrs. Raynold Stanley Loewer of Eunice and Mr. Leslie Kim Kelly of Breaux Bridge. His grandparents are Mrs. Elaine Fortson of Eunice and the late Mr. Melvin Fortson Sr. and Mrs. Lessie Miller of Breaux Bridge and the late Mr. Charles Kelly.
The groom is a 2007 graduate of Notre Dame High School of Acadia Parish and earned an associate degree in business administration in 2012 at Baton Rouge Community College. He is employed as a materials coordinator at Precision Cutting in Eunice.
The church was beautifully decorated with an abundance of flowers. The front entrance doors were adorned with wreaths of mixed peach and ivory flowers, and the inside of the church featured mixed arrangements of peach, blush and ivory flowers.
Pews were marked with clutches of ivory hydrangeas mixed with peach and blush roses and tied with ivory satin ribbon, as well as with candles in ivory lanterns.
Music for the ceremony was provided by organist Kip Faulk and vocalist Sarah Kirksey.
Escorted to the altar by her father, the bride entered the sanctuary to the strains of Clarke’s “Trumpet Voluntary.” She was beautiful in a sleeveless fit and flare gown of intricate ivory lace over a light gold satin lining with a high illusion neckline. The gown featured a scalloped lace back with multiple keyhole button enclosures and was finished with a row of covered buttons that ran from the bride’s waist to the end of the flowing, scalloped-edge semi-cathedral train.
The bride paired her dress with a simple organza mid-length veil.
She carried a mixed bouquet of ivory roses, including ivory majolica roses and white O’Hara garden roses, dusty miller and seeded eucalyptus tied with ivory ribbon. Her late maternal grandmother’s rosary and the wedding rings of her late maternal grandparents were incorporated into the bouquet.
Emily Anne Arceneaux served as maid of honor. Bridesmaids were Megan Doucet, Brittany David, Tristen Duhon, Caroline Thevis, Leah Gossen, Ally Kelly and Andrea Foreman.
They were clad in floor length gowns of blush luxe chiffon with classic A-line silhouettes. The sleeveless dresses featured bateau necklines with fine vertical gathers that defined the bodices and released the soft, flowing skirts just above the natural waistlines. They backs were finished with deep V-necklines.
The bridal attendants carried bouquets of ivory hydrangeas, peach roses, peach berries, peach stock, seeded eucalyptus and dusty miller tied with Ossian ribbon.
John Jude Scelfo attended the groom as best man. Standing as groomsmen were Matthew Jones, John Edward Hundley, Andrew Welter, Lucas Kelly, Christopher Foreman, J.W. Faulk and Seth Fruge.
Ushers were Ty Melancon Jr. and Anthony Cart.
Serving as flower girl was Ella Maria O’Meara, daughter of Mr. and Mrs. Patrick O’Meara. She wore a darling ivory organza tea length dress with a full skirt and A-line silhouette. The dress was defined at the waist with an elegant blush pink satin sash finished with a bow and tails. She wore a special pearl headpiece that had been part of the bride’s late maternal grandmother’s wedding veil.
Kolton Dale Cini, son of Brittany and Carl Cini, served as ring bearer, carrying an heirloom pillow from the bride’s parents’ wedding.
Carter Ashton Kelly, son of Ally and Lucas Kelly, carried a sign that read, “Uncle Drake here comes your girl.”
After the wedding party departed the church to Charpentier’s “Prelude from Te Deum,” family and friends joined the newlywed couple for a celebratory reception at The Springs Ballroom in Iota.
Heart-shaped wreaths were placed on the doors and guests arriving at the reception passed beneath a grape vine arch strung with lights.
The reception hall was decorated throughout with ivory and gold lanterns, votive candles in lace holders and framed pictures of the bride and groom.
Rather than a traditional registry, guests signed a wooden bench and a wedding quilt made by the bride’s mother.
The guest tables were covered in linens in an elegant champagne sequence and topped with large gold trumpet vases filled with ivory roses and seeded eucalyptus and surrounded by candles.
A memory table was set up to display pictures honoring the couple’s late grandparents and other close relatives who had passed away.
The bride’s four-tiered vanilla cake featured strawberry and Bavarian cream fillings. It was decorated with smooth ivory buttercream icing and adorned at the base of each tier with Victorian lace, ivory satin ribbon and ivory buttercream pearls. It was displayed on a gold stand placed on a table covered with an ivory curly willow cloth.
The groom’s cake was a two-tier chocolate confection decorated with ivory buttercream icing drizzled with chocolate. It was garnished with fresh strawberries and displayed on a table made from a glass-topped wooden barrel engraved with the couple’s wedding date.
On the evening prior to the wedding, the parents of the groom, Mr. and Mrs. Loewer, hosted a rehearsal dinner at Ruby’s in Eunice.
Following a wedding trip to the Atlantis Paradise Island Resort in the Bahamas, the newlywed couple will reside in Eunice.