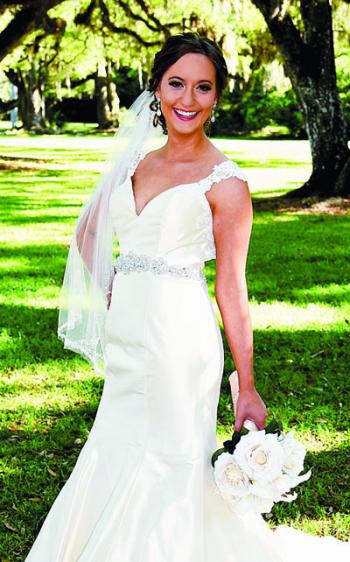 RAYNE - On Saturday, the ninth of July, 2016, at six-thirty in the evening before family and friends, Gretchen Renee Swinkey and Robert Dale Wimberly, Jr. celebrated the sacrement of holy matrimony in a ceremony at St. Joseph Roman Catholic Church.
The bride is the daughter of Linda Reiners Swinkey and Joseph Swinkey, Jr. of Rayne. Her grandparents are Mrs. Harriette “Honey” Reiners of Mowata, the late Joseph Reiners, Mrs. Helen Swinkey of Monroe, Michigan, and the late Joseph Swinkey, Sr. She is a 2008 graduate of Notre Dame High School of Acadia Parish and is employed by Splash Creative Products in Opelousas.
The groom is the son of Pamela LeJeune Wimberly and Robert Dale Wimberly, Sr. of Church Point. His grandparents are Chester Wimberly, Sr. of Swords, the late Betty Wimberly, and Norma and John LeJeune of Lawtell. He is a 2007 graduate of Church Point High School and is self-employed.
The Reverend Garrett Savoie, friend of the family, officiated during the double-ring ceremony. Altar server for the ceremony was Wyatt Lacour. Scripture passages chosen by the couple for their special day were read by Janet Reiners Hebert, godmother of the bride, and Belinda Wimberly, godmother of the groom. Eucharistic minister was Mary Swinkey, aunt of the bride.
The sanctuary of the church was decorated with greenary with the center aisle adorned with bridal tulle garland accented with fuschia chiffon bows and chiffon and burlap streamers.
Greeting guests and distributing programs were Margaret Louise Winfrey and Victoria Elizabeth Winfrey, cousins of the bride.
Mrs. Alberta Lyons, cousin of the bride, served as organist, and trumpeteer was Jude Gaspard. Vocalists were Renee and Steve Reiners, aunt and uncle of the bride.
Presenting gifts at the offertory were Karen Reiners Winfrey, aunt of the bride, and Kasey Castille, special friend of the groom.
The bride, given in marriage by her father, wore a formal modified a-line gown made from slim-fitting, sculpted satin accented with delicate lace straps and a beaded belt at the natural waist. A striking open back fastened with self-covered buttons was finished with a cathedral train. She wore a fingertip, beaded edge veil to complete her attire, while carrying a clutch bouquet of garden roses, hydrangea and blush spray roses finished with baby’s breath and satin ribbons.
To complete the bridal verse, the bride wore her great aunt, Elizabeth Reiners’ ring as something old; her wedding gown and veil were something new; something borrowed was the garter worn by her maternal grandmother, Harriette Reiners on her wedding day. As something blue she carried the blue rosary her maternal grandfather, Joseph Reiners, gave to her maternal grandmother, Harriette Reiners; and a sixpence placed in her shoe by her father.
Attending the bride as maid of honor was her sister, Katherine Marie Swinkey. Bridesmaids were Hailie LeJeune and Jessica Wimberly, sisters of the groom; Katie Whiting, friend of the bride; Callie Reiners, cousin of the bride; and Hailey Latiolais, friend of the couple.
Bridal attendants were attired in floor length gowns of turquoise chiffon featuring single cap sleeves and a slanted/asymmetrical empire waistline. Each carried a bouquet of garden and spray roses wrapped with burlap and satin streamers.
Junior bridesmaids were Emily Claire Matt, godchild of the bride, and Annie Matte, godchild of the groom.
Junior bridesmaids were attired in gown of fuschia chiffon designed with a delicate scooped neckline featuring a mushroom pleated criss-cross bodice. Each carried a bouquet of garden and spray roses wrapped with burlap and satin streamers.
Flower girls were Audrey LeJeune, niece of the groom, and Abbie Latiolais, godchild of the groom.
Flower girls were attired in white taffeta gowns featuring a gathered skirt, round neckline, capped sleeves, and a large sash and bow at the waistline. Each carried a pomander ball of baby’s breath trimmed with satin ribbon.
The groom chose a close friend, Blake Olivier, as his best man. Groomsmen were Josh LeJeune, brother-in-law of the groom; Brad Reiners, cousin of the bride; Kaleb Deshotel, cousin of the groom; Joey Richard and Chris Latiolais, friends of the groom.
Ring bearers were Wylie Olivier, godchild of the groom, and Qwentin Latiolais, friend of the bride and groom.
Ushers for the evening were Christopher Hebert, cousin of the bride, and Timmy Savoy, friend of the groom.
Male attendants and fathers of the bride and groom were attired in tan tuxedos for the wedding. Their boutonnieres were spray roses designed in shell casings.
For her daughter’s wedding, Mrs. Swinkey chose a two piece champagne gown featuring a beaded lace jacket and a princess cut floor-length skirt. She was presented with a corsage of pink sweetheart roses.
Mrs. Wimberly, the mother of the groom wore a floor length gown of teal chiffon featuring draped sleeves and a jeweled neckline. She was also presented a corsage of pink sweetheart roses.
Special guests for the evening were Mrs. Harriette “Honey” Reiners, grandmother of the bride; Mr. and Mrs. Chester Wimberly, Sr., and Mr. and Mrs. John LeJeune, grandparents of the groom.
Immediately following the wedding ceremony, a reception was held at the Rayne Civic Center.
Among the refreshments was the bride’s cake, a three tiered white confection decorated with blush and pink rose sprays.
The groom’s cake was a traditional chocolate confection featuring a miniature scene showcasing the groom’s farm.
Following a honeymoon to Orlando, Flordia, the couple will make their home in Swords.
The rehearsal dinner was held on Thursday, July 7, 2016, at the Daigle camp in Church Point. Hosts were Gertrude Broach, Florine Daigle, Linda Champion, Gabby Champion and Diana Richard, family and friends of the groom.