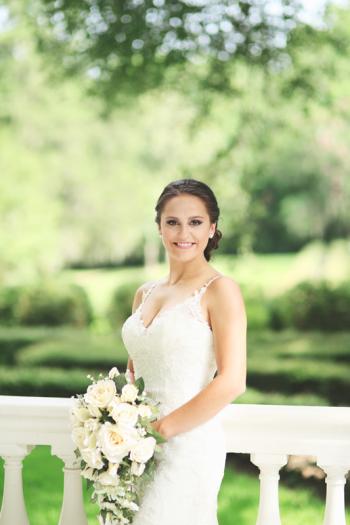 Haley Dawn Guidry of Mermentau and Rhett Michael Cormier of Morse were united in holy matrimony on Saturday, Aug. 15, at St. John the Baptist Catholic Church in Lyons Point.
Fr. Clint Trahan officiated the 1 p.m. nuptials.
The bride is the daughter of Melissa and Timothy Guidry of Mermentau. She is the granddaughter of Joyce and Russell Louviere of Evangeline and Brenda and Roger Guidry of Mermentau.
She is a 2012 graduate of Midland High School and a 2013 graduate of Unitech Training Academy. She is presently employed as a dental assistant at Kool Smiles General Dentistry.
The groom is the son of Carrie and Curry Sattler of Lafayette and Brandi and Bradley Cormier of Morse. His grandparents are Barbara and Leonard Clark and Bobbie and Jerome Cormier, all of Morse.
He is a 2012 graduate of Midland High School and is currently employed as an operator with Wood Group.
Escorted to the altar by her father, the bride was gorgeous in an ivory gown of richly embroidered lace enhanced with gold and silver details. The slim fit gown featured a trumpet silhouette, and its intricate design was enhanced by layers of gossamer lace and organza.
The bride paired her gown with a sheer lace chapel length veil.
She carried a lovely bouquet of roses and calla lilies ornamented with a cameo that had belonged to her late great-grandmother.
The cameo served as “something old” and “something borrowed,” while the bride’s dress was “something new” and the date of the wedding embroidered into the dress was “something blue.”
Maid of honor duties were shared by Sheridan Guidry, cousin of the bride, and Delaney Vallo, best friend of the bride.
Bridesmaids were Lacey Weber, Jane Voorhies, Bree Beard, Kalli Benoit, Katie Broussard and Natalie Hayes, friends of the bride; Kyra Louvierre, cousin of the bride; and Kierra Li, cousin of the groom.
Kamryn Cormier, sister of the groom, served as junior bridesmaid.
The bridesmaids were clad in floor length plum crinkle chiffon dresses featuring sweetheart necklines, cap sleeves and keyhole backs. The ruched bodices gave way to empire waistlines from which the long, shirred skirts flowed.
The dresses were paired with calla lily bouquets.
Stephen Broussard, cousin of the groom, served as best man. Standing as groomsmen were Trevor Guidry, brother of the bride; Tyler LaPoint, Chance Henry, Devon Vincent, Lee Breaux, Jacob Sloane, Grant Clark and Travis Schexnider, friends of the groom; and Galen Ridgel, cousin of the groom.
Zachary Guidry, brother of the bride, and Leighdon Sattler, brother of the groom, served as junior groomsmen.
The godchild of the bride, Carley Guillory, and the sister of the groom, Aubrey Cormier, served as flower girls.
Ring bearers were Philip Thibodeaux, friend of the bride, and Wyatt Cormier, brother of the groom.
Selected scriptures for the ceremony were read by the bride’s paternal grandmother and Regina Wedekind.
Following the wedding, family and friends joined the couple at a reception held at the Gueydan Civic Center.
The bride’s four-tiered square cake was covered in decadent ivory buttercream adorned with pearl scallops and lace pieces. It was served on an antiqued silver plateau and topped with sugar flowers and the initial “C” to represent the last name of the newlywed couple. The cake was served by Anisa Reed, aunt of the bride.
The groom’s cake was crafted in the shape of a duck call and Yeti cooler to reflect the groom’s love of hunting. The cake was served by Emmie Clark, godmother of the groom.
Out-of-town guests traveled from Illinois, Texas and various points throughout Louisiana.
On Thursday, Aug. 13, the parents of the groom served jambalaya at a rehearsal dinner held at the Knights of Columbus Hall in Estherwood.
The couple plans to reside in Morse.