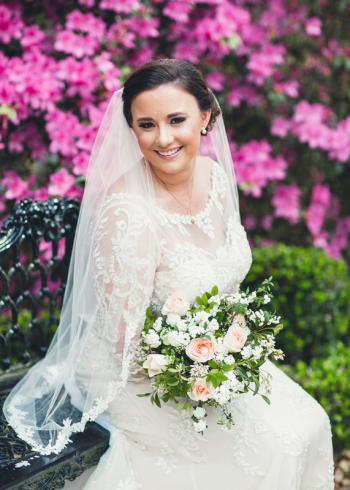 Chelsea Elizabeth Harst and Todd Patrick Guidry, both of Lafayette, were united in holy matrimony on the evening of Friday, April 15, at St. John Berchmans Catholic Church in Cankton.
Msgr. Russell Harrington celebrated the 6:30 p.m. Nuptial Mass.
The bride is the daughter of Lesley and Raymond Harst of Lafayette. She is the granddaughter of Josephine Phillips and the late Lloyd Phillips, and of Shirley Harst and the late Walter Harst, all of Kinder.
Chelsea is a graduate of St. Thomas More Catholic High School and the University of Louisiana at Lafayette, and she is presently employed with the Lafayette Parish School System.
The groom is the son of Cathy and Dennis Guidry of Estherwood. His grandparents are Ethel and Austin “Tony” Brown of Iota and Audrey Guidry and the late Laryman Guidry Sr. of Estherwood.
Todd is a graduate of Notre Dame High School of Acadia Parish and the University of Louisiana at Lafayette, and he is currently employed by TransCanada Pipeline Co.
Guests were ushered to their seats by Garrett Puckett, cousin of the bride; Craig Guidry, cousin of the groom; and Chris Faulk, friend of the groom.
Musical selections for the ceremony were performed by Richard Guidry, Mike McGee and Tina Reaux.
Given in marriage by her father, the bride was gorgeous in a dramatic illusion lace back dress featuring a pearl button enclosure and three quarter lace sleeves. The hand-embellished sheath gown was adorned with glimmering lace appliqués and embroidered with Swarovski crystals drifting from the bride’s shoulder to a floor-skimming hem. A delicate scalloped hemline completed the gown’s cathedral length train. To complement her gown, the bride carried a mixed bouquet of fresh spring blooms.
In keeping with tradition, the bride wore a necklace that had belonged to the groom’s great-grandmother as “something old,” while her dress served as “something new.” Her mother’s pearl, sapphire and diamond ring was “something blue.”
Ashley Puckett, cousin of the bride, served as maid of honor. Bridesmaids were Katy Guidry and Emily Lanphier, friends of the couple; Christina Guidry, sister-in-law of the groom; Meagan LeBeouf, cousin of the groom; Ashley Duhon, Amber Kokas and Alyssa Grueber, cousins of the bride; and Meagan Harst, sister-in-law of the bride. Audrianne Mouton, godchild of the groom, and Emma Puckett, cousin of the bride, served as junior bridesmaids. Parker Leblanc served as flower girl.
The groom selected his brother, Kyle Guidry, to serve as best man. Standing as groomsmen were Henry Walton and Ethan Hebert, friends of the couple; Clay Harst and Chance Harst, brothers of the bride; Dustin Bouillion and Andre Boudreaux, friends of the groom; and Jordan Puissegur and Bennett Guidry, cousins of the groom. Micha Lemoine, godchild of the bride, served as junior groomsman. Ringbearers were Karter Guidry and Easton Poff, godchildren of the groom, and Thomas Harst, nephew of the bride.
Selected scriptures were read by Amanda Lafleur, Noelle Thomas and Taylor Bull.
Offertory gifts were presented by Julia and Wendell Bertrand, Denise Gravot and James Brown.
Following the wedding, family and friends joined the newlywed couple for a reception at The Crossing at Mervine Kahn in Rayne.
The bride’s berry chantilly cake was served by her godmother, Julia Bertrand. In lieu of a traditional groom’s cake, bread pudding made by the groom’s maternal grandmother was served by the groom’s godmother, Denise Gravot.
Out-of-town guests in attendance traveled from Colorado, Mississippi, Tennessee, Texas and various points throughout Louisiana.
On the evening prior to the wedding, the groom’s parents hosted a rehearsal dinner at The Crossing at Mervine Kahn.
Following a wedding trip to Riviera Maya, Mexico, the couple is residing in Lafayette.