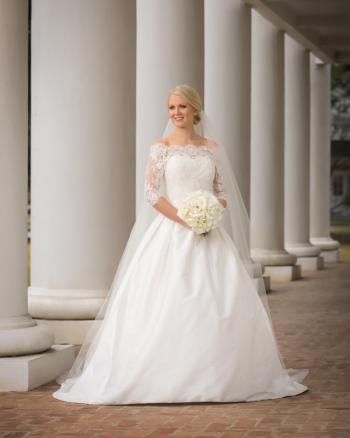 In a beautiful candlelight ceremony on Saturday, Feb. 13, at 7 in the evening, Miss Mary Gayle Hensgens and Mr. Charles Lane Anzalone Jr. exchanged sacred marriage vows before the altar of the Cathedral of St. John the Evangelist in Lafayette.

The most Reverend Monsignor Keith DeRouen was the celebrant of the nuptial Mass and officiated during the wedding service of the church.

Readers of the sacred scripture were Mr. Samuel Adams Robertson, uncle and godfather of the bride, who read Sirach 26:1-4, 13-16, and Mr. Andrew Paul Schumacher, friend of the bride and groom, who read Colossians 3:12-17, as well as the Prayers of the Faithful.

Presenting the offertory gifts were Amanda Anzalone Credeur and Katie Anzalone Broussard, sisters of the groom, and Jane Banos DeWalch and Ann Catherine Roussel, friends of the bride.

Enhancing the beauty of the historical cathedral and signifying the sacred occasion of the Sacrament of Marriage were the placement of floral bouquets of blush and ivory roses, accented with white hydrangeas and tied with ivory satin ribbons to the pews of the main aisle. The beautiful stained glass windows along the side aisles of the church were softly illuminated with ivory candles encircled with wreaths of rosemary. On the main altar of the church were two cascading arrangements of garden flowers in shades of white, ivory, blush and champagne atop french urns.

The mother of the bride was escorted into the church by her youngest son, David Braxton Hensgens. The groom escorted his mother accompanied by his father, who served as best man. The mothers were seated in their respective family pews to the beautiful “Jesu, Joy of Man’s Desiring” by Bach.

In the traditional gesture of honor, guests rose from their seats as the strains of “Trumpet Voluntary” filled the cathedral. The beautifully carved doors of the church were opened, and the bride entered on the arm of her father. She was escorted in slow procession to the main altar, softly draped beneath a veil of silk illusion. Upon reaching the steps of the sanctuary, in the endearing custom, her veil was lifted by her father, who presented her to the groom.

For her wedding day, the bride chose a formal gown of ivory silk dupioni. Elegant in its simplicity, the fitted, ruched bodice featured a sweetheart neckline that was softly hidden beneath a delicate lace jacket. The off-the-shoulder, three quarter length sleeve design was fastened at the back with silk-covered buttons. From the appointed waistline, the full silk skirt was gently folded into box pleats that gracefully led to the hemline of the formal gown and flowed into the cathedral length train. The bride wore her mother’s wedding veil of silk illusion in cathedral length. She chose a pair of pearl earrings, a gift from the groom, as her only jewelry.

In keeping with tradition, the bride’s Baptismal medal was sewn into her gown as something old, her dress was something new, her mother’s bridal veil was something borrowed, and blue satin ribbons, worn at her First Communion, were tucked into her bouquet, as something blue.

To further compliment the simple elegance of her gown, the bride carried a hand-tied bouquet of blush and ivory roses accented with white hydrangeas. She placed within her bouquet a rosary belonging to her brother, William Moody Hensgens, and a silver photograph locket that she carried in his loving memory. A delicate lace and linen handkerchief embroidered with the bride’s initials, a gift from the groom’s mother, was also carried by the bride.

The brides honor attendant and youngest sister, Christina Margaret Hensgens, wore a sleeveless gown of champagne silk chiffon. An overlay of softly pleated sheer chiffon began at the jewel neckline covering the sweetheart bodice of the gown. The pleated chiffon fell from the banded waistline and continued into the flowing skirt of formal length, completing the lovely silhouette of the maid of honor. The maids in attendance to the bride were presented in identical gowns.

The bridesmaids were Valerie Hensgens Lyons and Gretta Hensgens Trahan, sisters of the bride; Mary Grace Leonards, cousin of the bride; Heidi Bourgeois Hensgens and Olivia Joseph Hensgens; sisters-in-law of the bride; and Brooke Thomas Anzalone, sister of the groom. The bridesmaids carried hand-tied bouquets of blush and ivory roses and white hydrangeas accented with dusty miller foliage.

Miss Anna Katherine Hensgens and Miss Camille Therese Trahan, nieces of the bride, processed together as junior bridesmaids. The young girls wore the same chiffon dress as the bridesmaids, hemmed to a shorter length.

Immediately preceding the bride were the youngest members of the wedding party. Miss Lillian Knox Credeur and Miss Chloe Ann Broussard, nieces of the groom, along with Miss Mary Ellen Trahan and Miss Valerie Ann Lyons, nieces of the bride, served as flower girls. They were dressed in sleeveless gowns of ivory silk featuring round necklines. The tea length full skirts flowed from the empire waists and were gathered in the back by silk sashes. To compliment their dresses, the girls wore beaded ivory evening sweaters and carried small bouquets of bridal roses.

Attending the groom as best man was his father Dr. Charles Lane Anzalone Sr. Other groomsmen included Phillip Brown and Randall Schmid; cousins of the groom; David Hensgens, brother of the bride; and Andrew Schumacher, Stewart Aucoin, Phillip Fontenot and Ellis Landreneau, friends of the groom.

Serving as ushers for the ceremony were Timothy Credeur and Scott Broussard, brothers in law of the groom, and Collin Melancon and James Doughty, friends of the groom.

The men of the wedding were attired in formal black tuxedos with bowties.

For her daughter’s wedding day, Mrs. Hensgens, the former Valerie Moody, chose an evening gown of teal blue Thai silk. The fitted jacket featured a portrait collar with a double layer of silk ruching. Swarovski crystal buttons fastened the jacket as well as the three quarter length cuffed sleeves. A small bouquet of roses were tied with silk ribbon to the evening bag carried by Mrs. Hensgens.

Mrs. Connie Cassidy Anzalone, mother of the groom, was noted wearing a lovely gown of lapis blue lace. A soft neckline and three quarter length sleeves gracefully framed the bodice of the gown. The flowing A-line design fell to an elegant formal length. Mrs. Anzalone wore a delicate bouquet of bridal roses at her wrist, along with complimentary accessories to complete her attire.

At the end of the nuptial Mass, the young couple carried a bouquet of roses to the Blessed Mother statue. As the beautifully sung “Ave Maria” filled the church, they entrusted their newly married life into her care and protection. As the couple returned to the altar, they presented roses to their mothers in a tender moment of gratitude.

Immediately following the ceremony, the parents of the bride were hosts at a reception for the newly wedded Mr. and Mrs. Anzalone at The City Club of Lafayette. The ballroom was beautifully decorated with tall crystal candelabras gracing the tables, which were draped in ivory floor length linens. Also noted were mint julep cups filled with roses and hydrangeas and large, cascading arrangements throughout the venue. The reserved tables were distinguished by the placement of slender, antique gold pedestals. Full arrangements of bridal roses and hydrangeas, encircled with varigated miniature English ivy and flowering branches, topped the centerpieces.  All of the wedding flowers selected by the bride for the ceremony and reception were artfully designed by Melissa Bijeaux.

The cake service was placed before the mirrored mantle in the main ballroom. The bride’s cake was a five-tiered confection topped with a delicately rolled ivory fondant and embellished with intricate lace appliques. A lace border surrounded each layer of the cake. A bouquet of bridal roses graced the crowning tier and surrounded the base of the cake.

After the cutting of the cake by the newly wedded couple, the bride’s cake was served by her godmother, Mrs. Beverly Hensgens Dorr. The guests enjoyed the flavorings of each tier that included amaretto raspberry, Mexican white chocolate and butter pecan. The groom’s cake was a double-layer confection of triple chocolate fudge with cascading chocolate-covered strawberries on each corner of the cake.

For the wedding toast, the bride and groom used the heirloom silver goblets that were used by the bride’s parents at their wedding. The goblets were a wedding gift to Mr. and Mrs. Braxton I Moody Sr., the great-great grandparents of the bride.

As the end of the reception drew near, guests gathered outside in the crisp February evening and lined the hall of the covered corridor, awaiting the departure of the young couple. Amid tender farewells and showering rose petals, the bride and groom left for their wedding trip to the island of St. Lucia.