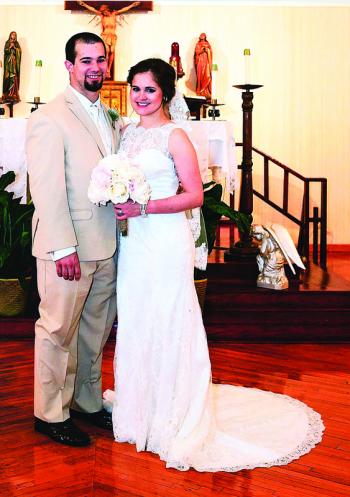 Shelbee Marie Hoffpauir of Egan and Brennan Jules Riche’ of Lafayette were joyfully united as husband and wife on Saturday, May 30.
Fr. Clint Trahan and Deacon Thomas Sommers officiated the 1 p.m. double ring ceremony at St. John the Baptist Catholic Church in Lyons Point.
The bride is the daughter of Gwendolyn and Dennis Hoffpauir of Egan. Her maternal grandparents are the late Verna and Daniel Dugas of Lyons Point. Her paternal grandparents are C.W. and Audrey Hoffpauir of Crowley and the late Julianna Ohlenforst Hoffpauir.
Shelbee graduated from Crowley High School before attending the University of Louisiana at Lafayette, where she was a member of the Ragin’ Cajun Powerlifting team, and where she earned a Bachelor of Science degree in education. She is presently employed as a teacher at Marshall Durham Middle School in Dallas, Texas, where she also coaches volleyball, soccer and cross country.
The groom is the son of Matthea LaCour Rabalais of New Roads and Dwayne Paul Riche’ of Cottonport. His grandparents are LeeAnn and Delmayne “Bubber” LaCour Sr. of New Roads and Mercedes Cazelot of Cottonport.
Brennan is a graduate of Marksville High School and the University of Louisiana at Lafayette, where he earned a Bachelor of Science degree in education and was a member of the Ragin’ Cajun Powerlifting team. He is currently studying chiropractic at Parker University in Dallas, Texas.
Guests were escorted to their seats by Luke Broussard and Zack Simon, cousins of the bride.
Music for the ceremony was provided by the St. John the Baptist Catholic Church Choir. Special selections included a trumpet rendition of “Here Comes the Bride” and “The Wedding Song” performed by Trey Hayes.
Escorted to the altar by her parents, the bride was beautiful in an ivory Schiffli lace gown featuring a scalloped bateau neckline. The fitted bodice was closed at the back by a row of small pearl buttons that trailed down to the hip, and the semi A-line skirt flowed softly into a cathedral train.
For her headpiece, Shelbee selected an ivory veil of imported English illusion trimmed with lace from a mantilla.
She carried a hand-tied bouquet of classic pink and ivory peonies with pendants from her Alpha Delta Pi sorority sisters affixed at the base.
In keeping with tradition, the bride wore her late maternal grandmother’s earrings as “something old,” while her wedding dress served as “something new.” The pendants of her sorority sisters included in her bouquet were “something borrowed,” and her late paternal grandmother’s sapphire ring was “something blue.”
Brittney Abshire, cousin of the bride, served as matron of honor, and Summer Meche, friend and sorority sister of the bride, served as maid of honor.
Bridesmaids were Brynn Jabusch, cousin of the bride; Casey Riche’, sister of the groom; Lanie Williams and Marissa Robb, friends and sorority sisters of the bride; and Jodi Luedke, best friend of the bride.
Ella Jabusch, cousin of the bride, served as junior bridesmaid.
Flower girl was Charlotte Luedke, daughter of the bride’s best friend.
The bridal attendants were clad in navy chiffon gowns in varying silhouettes of their own choosing, and they carried bundles of baby’s breath hand-tied with twine.
Garrett Couvillion, best friend of the groom, fulfilled the duties of best man. Standing as groomsmen were Skylar Meaux, cousin of the bride; Mason Riche’, brother of the groom; and Darren Harrell, Andrew Reiss, Jamie Reiss and Derek Ward, friends and powerlifting teammates of the groom.
Liam Abshire, cousin of the bride, and Dakota Rabalais, brother of the groom, served as ring bearers.
Selected scriptures for the service were read by Terri Hoffpauir, godmother of the bride, and Gretel LaCour, godmother of the groom.
For her daughter’s wedding, the mother of the bride, the former Gwendolyn Dugas, wore a navy blue tea length all-over lace dress selected by her daughter. The dress was paired with a matching jacket trimmed with scalloped lace and embellished with sparkling sequin beading.
The mother of the groom, the former Matthea LaCour chose a navy blue dress featuring side ruching for an enhanced silhouette and cap sleeves. The bodice and neckline were adorned with vintage beads.
Both mothers wore corsages of ivory roses.
Following the ceremony, family and friends joined the newlywed couple for a reception at the Gueydan Civic Center.
The hall was decorated in a rustic chic theme with guest tables topped with handcrafted decorations of burlap, lace, navy blue ribbon, twine and baby’s breath displayed on slices of tree trunks.
The bride’s elegant four-tiered cake was decorated with buttercream rosettes on the bottom and middle tiers and textured buttercream icing on the remaining two. It was topped with a silver “R” to represent the newlywed couple’s last initial and displayed on a slice of oak tree trunk cut by the bride’s father. The cake was served by Roxanne Meaux, godmother of the bride.
The groom’s chocolate cake was decorated with an intertwined “U” and “L” to represent the groom’s alma mater and topped with handcrafted edible barbells to reflect his involvement in powerlifting. It was made and served by Gretel LaCour, godmother of the groom.
Out-of-town guests at the event traveled from Texas, West Virginia and various points throughout Louisiana.
On the evening prior to the wedding, the groom’s mother hosted a rehearsal dinner at the home of the bride’s godparents, Darryl and Terri Hoffpauir. The meal, prepared by the best man, included couvillion, chicken, pasta, corn, salad, bread and dessert.
Following a wedding trip to Gatlinburg, Tennessee, the couple resides in Dallas.