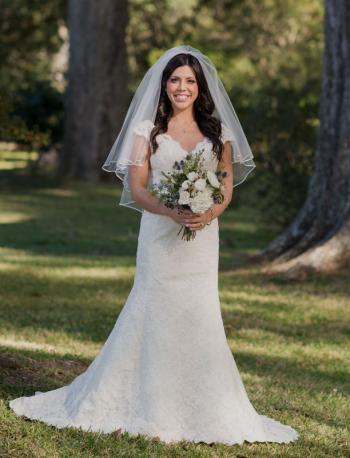 Olivia is a graduate of Saint Thomas More High School and the University of Louisiana at Lafayette.

Michael is a graduate of Notre Dame High School of Acadia Parish and Louisiana State University.

Given in marriage by her father, the bride wore an ivory Leon Carlo French Alençon lace trumpet gown, featuring a scalloped V-neckline with delicate cap-sleeves. Her back silhouette was accented with satin bridal buttons and a deep-V sheer back detail.

Olivia carried a bouquet of mixed white flowers, including anemones, Queen Anne’s lace and star of Bethlehem, accented with blue privet berries and draped with her maternal grandmother’s rosary.

Flower girls were Mary Ellen Trahan and Valerie Lyons, nieces of the groom.

Readings were presented by Sarah Breaux and Mallory Gauthier, friends of the bride, and Charlotte Moody Leonards, godmother of the groom.

Gift bearers included Valerie Hensgens Lyons, sister of the groom, and Gracie Leonards and Ian David, cousins of the groom and bride, respectively.

Following the ceremony a reception was held at Oakbourne Country Club in Lafayette.

Upon return from a honeymoon in the Bahamas, the couple will reside in Crowley.