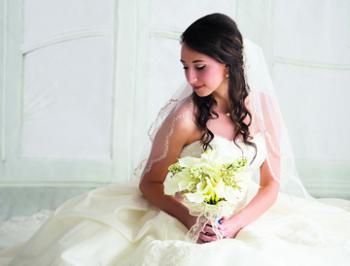 Saint Joseph Roman Catholic Church was the setting on Saturday, Aug. 20, 2016, for a wedding ceremony uniting in marriage Katherine Naomie Nero and Phillip James Dupuis. The six o’clock ceremony was officiated by Fr. Samuel Fontana, pastor.
The bride is the daughter of Carroll and Carolyn Nero of Rayne. Her grandparents are Emily Rankin of Palmetto, Florida, the late Larry Rankin, Richard Phifer, Murphy and Naomie Nero of Rayne. She is a 2010 high school graduate, a 2015 graduate of the University of Phoenix, and is employed by Play & Learn Nursery & Preschool in Scott.
The groom is the son of Denise Pellissier and John Dupuis of Rayne. His grandparents are Mr. and Mrs. Adam Pellissier of Rayne and the late Mr. and Mrs. Wilson Dupuis of Rayne. He is employed by Sterling Hyundai in Lafayette.
For the ceremony, Scriptures were recited by Kaylin Nero, cousin of the bride.
Against musical selections provided by Amy Whatley, guests were escorted to their seats by ushers Richard Nero Jr., nephew of the bride, and Martin Frisard, friend of the couple.
Escorted by her father, Carroll Nero Sr., the bride was radiant in an ivory Alfred Angelo wedding dress which included dazzling details, classic silhouette and romantic flow. The strapless, floor-length gown of netting and taffeta was highlighted with embroidered lace and metallic accents, crystal beading and sequins throughout. The A-line skirt flowed into a semi-cathedral-length train featuring a matching embroidered hemline. A crystal and rhinestone barrette detailed with Swaroski ivory pearls held her veil, a two-tier, finger-tip veil of ivory tulle classically shaped with gold scalloped crystal beadwork. She carried three dozen calla lilies intertwined with a pearl rosary and wrapped at the stem in cobalt blue lace and ivory bow.
Traditional items selected by the bride for her wedding day included her great-grandmother’s doily as something old, her wedding dress was something new, borrowed her mother’s sterling silver spoon bracelet, and her wedding shoes were something blue.
Attending the bride as maid of honor was Brandie Theriot, cousin of the groom.
Bridesmaids were Starlyn Stoute, cousin of the bride; Haley Nero, niece of the bride; Christie Theriot, cousin of the groom; and Shelby Wyatt, friend of the bride.
Bridal attendants each wore a one-shoulder, floor-length dress of cobalt blue crinkle chiffon designed with front and back keyhole closures and an A-lined skirt. Each carried a dozen calla lilies accented with white stem Astible bush and wrapped in ivory ribbon.
Serving as flowergirl was Faithlynn Nero, niece of the bride. She wore an ivory, floor-length dress of tulle and satin designed with embroidered lace and crystal beading. A cobalt blue satin belt was noted at the natural waistline, while her hair was styled to enhance a pearl tiara. She also wore cobalt blue shoes to match the bride, while carrying a flower basket filled with miniature calla lilies.
Attending the groom as best man was his brother, Jared Pellissier.
Groomsmen were John Bourque and Dwight Campbell, friends of the groom, and T-Carroll Nero Jr. and Richard Nero, brothers of the bride.
Male attendants wore black three-piece suits with cobalt blue vests and ties. Boutonnieres consisted of an ivory mini calla lily with cobalt blue ribbon.
Serving as ring bearers were Channing Dupuis, son of the couple, and David Nero, godchild/nephew of the bride. Each wore a black three-piece suit with cobalt blue vest and tie while sporting a mini calla lily boutonniere.
For her daughter’s wedding, the mother of the bride, Carolyn Phifer Nero wore an antique navy floor-length Xscape gown designed with a beaded illusion neckline and ruched bodice. A scoop neckline and capped sleeves were completed with intricate bead work throughout. Her flowers were two mini calla lilies gathered with ivory and cobalt blue ribbon and accented with pearl beads.
The groom’s mother, Denise Pellissier selected a floor-length navy blue sleeveless dress designed with a lace bodice over beige top. The hourglass silhouette and mermaid-style creation was completed with a cummabund-style sash at the waist, along with a satin bow sash. She was also presented two mini calla lilies gathered with ivory and cobalt blue ribbon and accented with pearl beads.
Immediately following the wedding ceremony, the newlyweds were honored during a reception held at The Union Hall in Rayne. An ivory and cobalt blue color decor was carried throughout the reception hall, along with floral bouquets of calla lilies throughout. Pictures of the couple, along with bridal photos of the bride surrounded the room. Of special remembrance was a special table for the couple’s grandparents.
Among the refreshments provided for the guests was the bride’s cake, a four-tier octagon confection of ivory fondant beautifully adorned with royal scrollwork and diamond cut impressions. The cake was also accented with fresh mini calla lilies and topped with the initials of the bride and groom. Guests were able to select from four cake flavors and eight fillings. The cake was served by Beverly Alleman, godmother of the bride.
The groom’s cake was a traditional two-layer chocolate confection topped with a fudge topping of chocolate drizzle.
Following a wedding trip to Gatlinburg, Tennessee, the couple will make their home in Rayne.
Prior to the wedding, a rehearsal dinner was held Friday, Aug. 19, at the Knights of Columbus Hall in Mire. Serving as hosts for the evening event were Denise Pellissier, mother of the groom; Marie Mouton, aunt of the groom; Ann and Mary Mouton, cousins of the groom; Karen Mire and Tickie Faul, friends of the family. Guests were served a menu of jambalaya, potato augrautin, vegetable and fruit trays, selection of sweets and beverages.