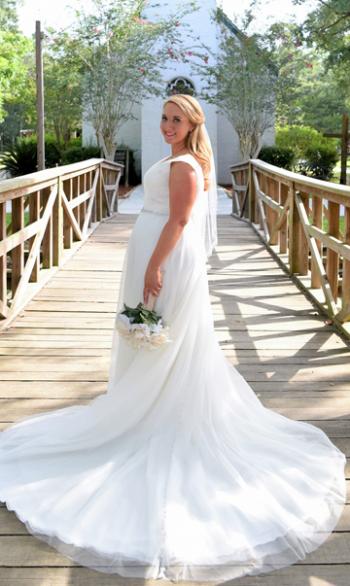 On Saturday, the tenth day of September of 2016, at six-thirty in the evening before family and friends, Katherine Marie Swinkey and Lance Joseph Caruso celebrated the sacrament of holy matrimony in a ceremony at St. Lawrence Catholic Church in Mowata.
The bride is the daughter of Linda Reiners Swinkey and Joseph Swinkey Jr. of Rayne. She is the granddaughter of Mrs. Hariette “Honey” Reiners of Mowata, the late Joseph Reiners, Mrs. Helen Swinkey of Monroe, Michigan and the late Joseph Swinkey Sr.
She is a 2003 graduate of Notre Dame High School of Acadia Parish in Crowley, received a degree in behavorial science from the University of Louisiana at Lafayette in 2009, and is presently employed as manager of Moments By Boujo in Metarie.
The groom is the son of Connie and Lester Caruso of Metarie. His grandparents are Pearl and Edmond Artique of Metarie, and the late Gladys and Nicholas Caruso.
He is a 2003 graduate of Brother Martin High School in New Orleans, received a degree in business administration from the University of New Orleans in 2009, and is employed by Automated Control Company in Metarie.
The Reverend Garrett Savoie, friend of the family, officiated during the double-ring ceremony. Scripture passages chosen by the couple for their special day were read by Kathy Artique, godmother of the groom; Kim Durr, aunt of the groom; and Chelle Comeaux, cousin of the bride.
A poem, “I Love You” by Croft, originally read at the bride’s godmother’s wedding, was receited by the bride’s aunt, Karen Winfrey.
Guests were ushered to their seats by Christopher Hebert, cousin of the bride.
The church sanctuary was decorated with greenery throughout. The center aisle was adorned with navy floral ribbon accented with mini green hydrangea.
Against a musical backdrop provided by Judy LeBlanc, the bride entered the church on the arm of her father wearing a formal wedding gown of ivory tulle designed with a V-neckline and ruching across a fitted bodice. The natural waist was enhanced with a slim crystal and rhinestone belt, form which fell an A-lined skirt gathered to the back with self-covered buttons until the end of a cathedral-length train. A simple hair comb held a fingertip veil of sheer illusion edged with a beaded hemline. She carried a clutch bouquet of white roses with blue and white hydrangea wrapped with burlap and satin streamers.
To complete the bridal verse, the bride wore a ring given to her by her paternal grandfather as something old, her wedding gown was something new, something borrowed was her veil worn by her sister at her wedding, and for something blue she carried the blue rosary her maternal grandfather gave to her maternal grandmother, along with a sixpence in her shoe by her father.
Attending the bride as matron of honor was her sister, Gretchen Swinkey Wimberly.
Bridesmaids were Rachel Smith and Christina Guidry, friends of the bride; and Ashley Reiners, cousin of the bride.
Junior bridesmaid was Margaret Louise Winfrey, godchild of the bride.
Bridal attendants each wore a formal-length gown of navy blue luxe chiffon designed with a unique crossed neckline, empire waist and A-lined skirt. Each carried a bouquet of blue and mini green hydrangea wrapped with burlap and satin streamers.
The groom’s best man was a close friend, Daniel Weimer III.
Groomsmen were Brandon Caruso, brother of the groom; Randy Schnadelbach, friend of the groom; and Kevin Durr, cousin of the groom.
Serving as ring bearer was Daniel Weimer IV, godchild of the groom.
The groom and male members of the wedding party each wore a tan tuxedo, noted with a boutonniere of white sweetheart roses accented with blue hydrangea.
For her daughter’s wedding, the mother of the bride chose a two-piece navy gown featuring a beaded lace jacket and a princess cut floor-length skirt. She was presented a corsage of white sweetheart roses.
The mother of the groom selected a light mauve lace and sequin tea-length gown designed with three-quarer-length sleeves. She was also presented a corsage of white sweetheart roses.
Special guests in attendance for the wedding were Mrs. Harriette “Honey” Reiners, grandmother of the bride, and Mr. and Mrs. Edmond Artique, grandparents of the groom.
Immediately following the wedding ceremony, a receptin was held in honor of the couple at The Grand Opera House of the South in Crowley.
Among the refreshments provided for the guests was the bride’s cake, a three-tier white confection topped with a “Mr. and Mrs.” insignia.
The groom’s table featured homemade cracklins, boudin and hog head cheese prepared by the groom and his grandfather.
The bride, groom, their families and guests enjoyed an evening of dancing to music provided by “Two Dollar Pistol” band of New Orleans.
Following their wedding trip to Orange Beach, Alabama, the couple will make their home of Metarie.
Prior to the wedding, a rehearsal dinner was held Thursday, Sept. 8, at St. Lawrence Catholic Church Hall in Mowata. Guests were served chicken, sausage and pork jambalaya, green beans, and a variety of cobblers for dessert. The meal was prepared by David Hebert, uncle of the bride, and Robert Wimberly Jr., brother-in-law of the bride.