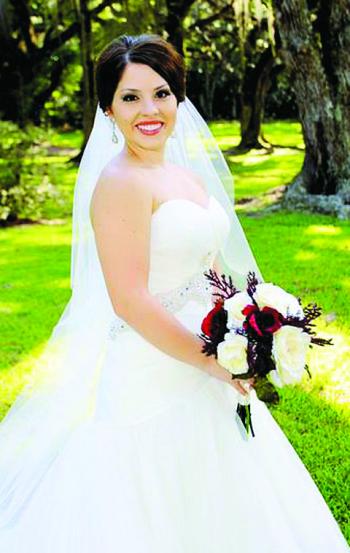 RAYNE - A six-fifteen evening Nuptial Mass on Saturday, October 17, 2015, at St. Joseph Roman Catholic Church united in marriage Kayla Jane McFalls Fontenot and Trevor Lee Deaville, both of Rayne.
The bride is the daughter of Jimmy and Norellie Fontenot of Rayne. Her grandparents are Billy and Merella McFalls, Andrus Fontenot and the late Rose Fonetnot, all of Rayne.
Kayla is a 2010 graduate of Rayne High School, a 2012 graduate of SLCC, and is presently employed by Fontenot Insurance Agency, a division of Dwight Andrus Agency.
The groom is the son of Donna Deaville of Hathaway and the late Norman Deaville. His grandparents are Geneva Daigle of Hathaway, the late Herbert Daigle, and the late John and Lydia Deaville of Jennings.
Trevor is a 2008 graduate of Hathaway High School and is employed by Inspectorate America Corporation.
The double-ring ceremony was celebrated by Deacon Denis LaCroix. Scriptures were recited by Kristie Anderson, sister of the groom, and Kristina Lavergne, godmother of the bride.
Against a musical background provided by Amy Whatley, guests were ushered to their seats by D.J. Anderson and Tyler Mitchell, nephews of the groom.
On the arm of her father, the bride entered wearing a drop-waist ballgown of ivory tulle featuring elegant scalloped lace hemline and formal-length cathedral train. An embellished inverted beaded, rhinestone and pearl belt adorned the waist of a timeless sweetheart bodice. She carried a bridal bouquet of hydranges, calla lilies, dahlias and ivory roses.
Traditional items selected by the bride for her wedding day was her great-grandmother’s rosary as something old, her wedding dres was something new, she borrowed her earrings, and her shoes were blue.
Attending her friend as maid of honor was Hannah Alleman. Another friend, Sara Hollingsworth, was matron of honor.
Bridesmaids were Brittany Castille and Brie Capritto, friends of the bride.
Bridal attendants each wore a sleeveless, floor-length dress in a champagne tone designed with a V-neckline and self-fabric flat cummerbund that held a faux crossover front design. Each carried a small nosegay of burgundy dahlias.
Serving as flower girl was the bride’s godchild, Sullivan Fontenot. She wore a floor-length dress of ivory silk designed with scalloped short sleeves, round neckline, and ruffled skirt. She carried a pomander ball of ivory roses.
Attending the groom as best man was a friend, Steven George. Groomsmen were Kevin MItchell, groom’s nephew, and friends Andrew Gonzales and Corey Smith.
Male attendants each wore a navy blue suit with ivory shirt and a burgundy and champagne paisley tie. The lapel was noted with a ivory rose boutonniere.
Serving as ring bearer was Tyce Fontenot, cousin of the bride. He wore navy blue pants and vest with ivory shirt and tie.
For her daughter’s wedding, the bride’s mother, Norellie McFalls Fontenot wore a floor-length gown deep purple chiffon designed with an off-the-shoulder sweetheart neckline and rouching at the waistline.
The groom’s mother, Donna Daigle Deaville selected a floor-length gown in teal chiffon with sheer leace three quarter-length sleeves and scooped neckline.
Immediately following the wedding ceremony, the newlyweds were honored during a reception held at The Crossing at Mervine Kahn. Guests attended from the Acadiana area, in addition to points of Texas.
Among the refreshments provided for guests was the bride’s cake, a three-tier square confection of buttercream embellished with sugar roses. The cake was served by the bride’s godmother, Kristina Lavergne.
The groom’s cake was a strawberry cheesecake and was served by Kendra Mitchell, the groom’s godmother.
Following a wedding trip to Nashville, Tenn, the couple are now residing in Rayne.
Prior to the wedding, a rehearsal dinner was held Thursday, Oct. 15, at the home of Kristina and Kyle Lavergne where guests enjoyed homemade jambalaya with the trimmings.