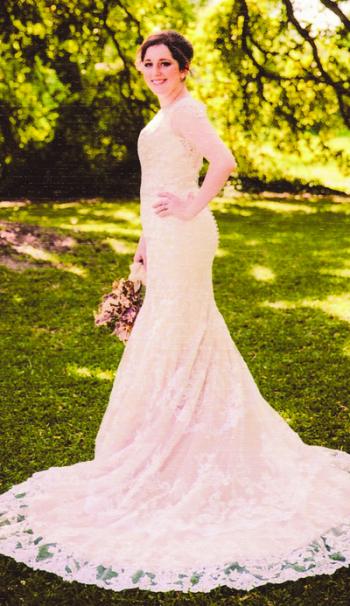 An eleven o’clock morning wedding ceremony on Saturday, May 28, 2016, united in marriage Lauren Elizabeth Montelaro of Lake Charles and Stephen Patrick Benoit of El Paso, Texas.
The bride is the daughter of Trey and Shelly Rion of Lake Charles. Her grandparents are Glenn and Nancy Bellon of Lake Charles, and James and Madeleine Montelaro of Eunice.
Lauren is a 2012 graduate of St. Luis High School in Lake Charles. She attained a bachelor’s degree in 2016 from McNeese State University in Lake Charles.
The groom is the son of Tommy and Claire Benoit of Crowley. His grandparents are Lawrence and Mary Cramer of Branch, and Lawrence and Alice Benoit of Youngsville.
Stephen is a 2010 graduate of Notre Dame High School of Acadia Parish in Crowley, and in 2014 attained a bachelor’s degree from McNeese State University in Lake Charles. He is presently serving his country as a member of the United States Army
The Nuptial Mass was celebrated at St. Leo IV Catholic Church in Roberts Cove by Fr. Paul Broussard.
Scriptures were recited by Jessica Hebert, the groom’s godmother, while Gifts were offered by Phyllis Gremillion and Lawrence Benoit, Jr.
Against a musical background provided by vocalist Vanessa Benoit, organist Alberta Lyons, trumpter Neil Simon, and violinist Tommy Benoit, the bride was escorted by Trey Rion and Gregory Montelaro.
She was radiant in a fit and flare bridal gown of ivory French tulle designed with an illusion beaded bateau neckline and pearl strands at the shoulders and back side. The sheer back was detailed with self-fabric buttons which fell into a chapel-length train. Her headpiece held a double-layered fingertip veil edged with a crystal and pearl hemline. She carried a bridal bouquet of anemones, white garden roses, pale yellow ranunculus and hydrangeas.
Traditional items selected for her wedding day included her Nan Pat’s (grandmother) childhood Bible carried by the ring bearer as something old. Her wedding gown was something new, while something both borrowed and blue was a charm sewn onto her wedding gown borrowed from her father, Trey Rion.
Attending the bride as her maid of honor was her best friend, Urvi Patel.
Bridesmaids were Adrienne Benoit, sister-in-law, and Anna Bellow and Shelby Michael, friends.
Junior bridesmaid was Katherine Rion, sister of the bride.
Bridal attendants each wore a floor-length dress of navy lace and tulle while carrying a bouquet of white garden roses and anemones.
Serving as flower girls were Aubrey Hollier and Reed Hollier, cousins of the bride. Each wore a dress of ivory lace trim while adorned with a baby’s breath floral crown.
Attending the groom as his best man was a friend, Shawn Guidry.
Groomsmen were Brett Montelaro, brother-in-law, and Zachary Benoit and Micholas Benoit, brothers.
Junior groomsman was Joshua Hebert, cousin of the groom.
Male attendants each wore a gray tuxedo with a navy tie.
Serving as ring bearer was Max Montelaro, cousin of the bride. He was attired in gray linen suspender shorts, white dress shirt, and completed with a navy bow tie.
Ushering guests to their seats were Brandon Benoit, friend of the couple, and Jacob Benoit, cousin of groom.
For her daughter’s wedding, Shelly Bellon Rion wore a champagne cocktail dress accentuated with embroidery and bead work.
The groom’s mother, Claire Cramer Benoit selected a rose gold lace cocktail dress.
Following the mid-day wedding ceremony, the newlyweds were honored during a reception held at The Warehouse Event Center in Rayne.
Among the refreshments served against a background of rustic elegance was the bride’s cake, a three-tier ivory confection adorned with fresh flowers and ruffled icing trim.
The groom’s cake, a traditional German chocolate confection, was designed with a video game theme identical to a Nintendo game console.
The couple now resides in El Paso, Texas.
Prior to the wedding, a rehearsal dinner was held Thursday, May 26, at the St. Leo IV Church Hall hosted by the groom’s parents. Guests in attendance were served by crawfish pastalaya, green beans, salad, along with petifores and gentilly cupcakes for dessert.