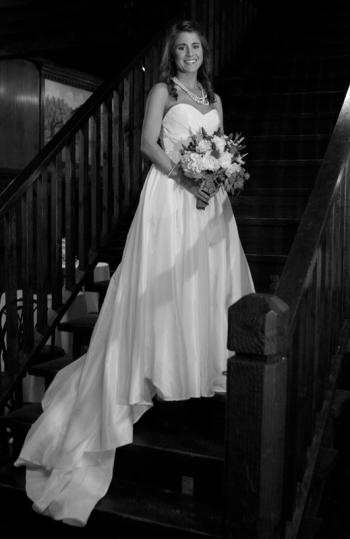 Lauren is a 2008 graduate of Notre Dame High School and a 2011 graduate of the University of Louisiana at Lafayette, where she earned a bachelor of science degree in animal science. She is currently pursuing a career in veterinary medicine.

Bradley is a 2007 graduate of Notre Dame High School and a 2012 graduate of the University of Louisiana at Lafayette, where he earned a bachelor of science degree in horticulture. He is currently employed with Lamm Brother Farms.

Escorted by her father, the bride wore a strapless empire waist, ivory silk gown with a sweetheart neckline and a chapel train. She carried an arrangement of white hydrangeas, lisianthus, English garden roses, and fall berries. In keeping with tradition, the bride carried a white handkerchief embroidered in blue with her initials and wedding date as her something blue. Something new was her wedding dress, and she wore her maternal grandmother’s garter as something borrowed and old.

Bradley chose his brother Dustin Reiners to serve as his best man, and his friend Robert Wimberley to serve as his groomsman. John Rothermel, brother of the bride, served as usher.

Selected scriptures were read by Callie Reiners, sister of the groom, and Dana Roger, godmother of the groom. An Acadiana Symphony Orchestra trio provided the musical selections during the ceremony.

The reception immediately followed and was held at The Warehouse in Rayne.