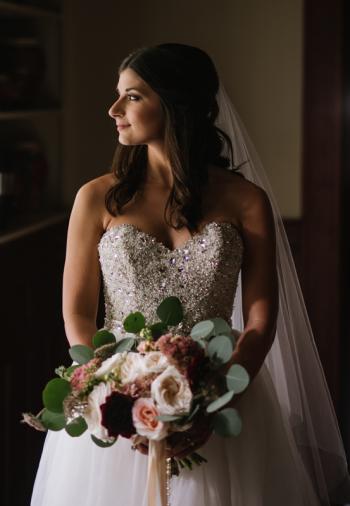 Jennifer Lynn LeBeouf and Zachary Michael David, both of Broussard, exchanged nuptial vows during a beautiful candlelit ceremony on the evening of Saturday, Nov. 14.
Jason Harrington officiated the 5:30 p.m. double ring ceremony in the lovely Rip Van Winkle Gardens on Jefferson Island in New Iberia.
The bride is the daughter of John Neal and Janice LeBeouf of Crowley. Grandparents of the bride are the late Ray and Gladys Lattier of Abbeville and the late Doris and Mamie LeBeouf of Crowley. Her honorary grandparents are the late Wilfred and Neumae Simon of Crowley.
Jennifer is a 2006 graduate of Notre Dame High School of Acadia Parish and a 2010 graduate of the University of Louisiana at Lafayette, where she earned a bachelor’s degree in exercise science. She is presently employed as a clinical manager and exercise specialist at Orthopedic and Sports Physical Therapy in Lafayette.
The groom is the son of Dwayne and Grace Kline Nelson and Michael and Alyson David, all of Opelousas. He is the grandson of Claire Kline of Reading, Pennsylvania, and the late James Kline, and of Johnny and Velma David of Krotz Springs.
Zachary graduated from Opelousas Senior High School in 2005 before earning an associate’s degree in nursing from Louisiana State University at Eunice in 2009 and a Bachelor of Science degree in nursing from McNeese State University in 2014. He is currently employed as a Registered Nurse clinical case manager with Community Home Health and Hospice in Lafayette.
The centerpiece of the ceremony was an eight-foot wooden cross built by the bride’s father and adorned with a large floral arrangement.
Given in marriage by her father, the bride was gorgeous in a Maggie Sottero ballgown featuring a fully encrusted Swarovski crystal bodice finished with a strapless sweetheart neckline and a full ivory organza skirt leading to a chapel length train. To accompany her gown, she selected a floor length ivory drop veil.
She carried a beautiful mixed bouquet of light pink and white garden roses, anemones, chocolate dahlias and silver dollar eucalyptus leaves tied with long, flowing white and ivory ribbons.
A ring belonging to a great aunt of the bride was “something old” and “something blue,” while the bride’s wedding dress was “something new” and a rosary loaned to the bride by her mother was “something borrowed.”
Serving as matron of honor was Courtney Hanks Hebert, friend of the bride. Allison LeBeouf, sister of the bride, served as maid of honor. Bridesmaids were Meagan LeBeouf, cousin of the bride, and Kylie Fontenot David, friend of the bride.
The attendants were clad in champagne floor length chiffon gowns with ivory lace sleeveless bodices.
They carried smaller versions of the bride’s bouquet tied with long, flowing white lace ribbons.
Sharing the duties of best man were Andrew David, brother of the groom, and Tommie Hicks, friend of the groom. Chris David, cousin of the groom, and Chris LeBeouf, brother of the bride, served as groomsmen.
Ushers were Ryan Guidry, friend of the bride, and Aaron David, brother of the groom.
Ava Villejoin, a family friend of the bride, served as flower girl. Ring bearer was Chad Duresseau, nephew of the groom.
Selected scriptures were read by Allison LeBeouf, sister of the bride, and Andrew David, brother of the groom.
For her daughter’s wedding, the mother of the bride, the former Janice Lattier, selected a floor length gown with a navy taffeta A-line skirt and a black bodice featuring three quarter length sleeves and sequined accents.
The mother of the groom, the former Grace Kline, chose a floor length jersey and lace gown in royal blue.
Following the ceremony, guests enjoyed an indoor/outdoor reception in the gardens, which were lit with tiki torches, candles and chandeliers hanging from the oaks.
The party featured an outdoor dance floor topped with string lights, and a live band from Abbeville, The Envies, provided music for the evening.
The bride’s cake was a four-tiered round confection of chocolate and white almond iced in white buttercream and topped with fresh flowers. It was served by Stephanie Hebert, godmother of the bride.
In lieu of a groom’s cake, the groom’s godfather, Craig Kline, served pizza from a three-tiered wooden stand.
Out-of-town guests at the wedding came from Pennsylvania, South Carolina, Texas and various points throughout Louisiana, and the bride and groom were thankful to all who had traveled.
On the Thursday evening prior to the wedding, the groom’s mother and stepfather hosted a rehearsal dinner at Cafe Jefferson in the Rip Van Winkle Gardens.
Following a wedding trip to St. Lucia, the couple will reside in Broussard.