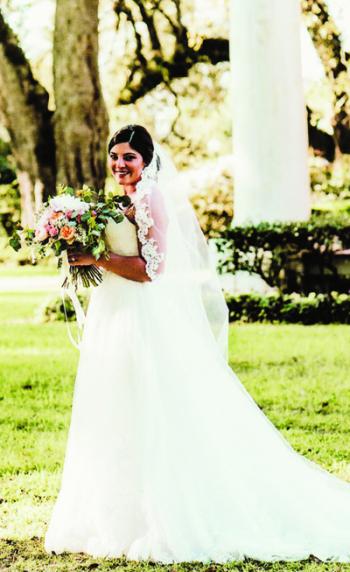 RAYNE - A seven o’clock evening Nuptial Mass was held Saturday, June 18, 2016, at St. Joseph Catholic Church joining Mayme Elizabeth Cook of Rayne and Mark Stuart Brown Jr. of Crowley in holy matrimony.
The bride is the daughter of Robert and Karon Cook of Rayne. Her grandparents are Rosemary Cook of Rayne, the late Dr. C.T. Curtis, and the late Mr. and Mrs. Lewis Cook.
Mayme is a 2011 graduate of Notre Dame High School of Acadia Parish in Crowley. She received a degree in nutrition in May of this year from Louisiana State University in Baton Rouge.
The groom is the son of Andree and Mark Brown Sr. of Crowley. His grandparents are Louis Mayeaux of Crowley, the late Charlotte Mayeaux, Terry Brown of Eunice and the late Francis Brown.
Mark is a 2006 graduate of Notre Dame High School of Acadia Parish in Crowley, attained a degree in 2011 from The University of Louisiana at Lafayette, and is self-employed.
The double-ring ceremony was celebrated by Fr. Samuel Fontana, associate pastor.
Scriptures were read by Cathy Hundley, aunt/godmother of the bride, and Halie Joubert, friend of the bride.
Gifts were offered by Alayna Reaux and Heidi Bellard, friends of the bride.
Musical selections were provided by vocalist Jody Bollich, organist Linda Kidd, violinist Yang Yang Li, and trumpeter Will Green.
On the arm of her father, the bride wore an elegant ivory wedding gown by Enzoani. The A-lined creation featured gorgeous Alencon and corded Chantilly lace which accentuated a romantic neckline. The soft, full-length tulle skirt was a perfect complement to the scalloped hemline and lace-accented cathedral-length veil. She carried a garden-inspired bouquet of David Austin Juliet roses, dahlias, antique hydrangeas, spray roses, and fillers of wax flowers, Dusty Miller and eucalyptus accented with flowing vines and ribbons.
Traditional items selected by the bride for her wedding day was her grandmother’s diamond ring as something old, a diamond band ring from the groom as something new, her sister’s rosary was borrowed, and a garter worn by the groom’s mother on her wedding day was something blue.
Attending the bride as maid of honor was her sister, Rosemary Cook.
Bridesmaids were Anna Duplechin, Charlotte Brown and Claire Brown, sisters of the groom; Leah Hundley, cousin of the bride; Vicky Stoma, Doren Welch, Blair Daigle and Morgan Arceneaux, friends of the bride.
Bridal attendants each wore a floor-length evening gown of navy blue crinkle chiffon wih beaded details at the shoulders. Each carried an airy bouquet of sugar bush proteas, waxflower, apricot stock, lise spray roses, amoresia roses, and antique hydrangeas accented with various foliage.
Serving as flower girl was Emma Duplechain, neice/godchild of the groom. She wore a sleeveless, ivory, tea-length dress designed with an empire waist, while wearing a halo of various roses and foliage with a simple ribbon down the backside. She carried an antique baby doll given to her by the bride and groom.
Attending the groom as best man was his brother, Phillip Brown.
Groomsmen were Peter Brown, brother of the groom; Patrick Duplechain, brother-in-law of the groom; Lance Meche, Drew Daigle, David Hensgens, Sean Michael Ryder, Matthew Schmid and Eric Savoy, friends of the groom.
Male attendants each wore a dark charcoal gray tuxedo with ivory shirt, matching vest and navy blue tie. Each lapel was noted with a boutonniere of small blossoms and fillers similar to the bouquets of the bridesmaids’.
Serving as ring bearer was William Broussard, nephew of the bride. His attire included dark charcoal gray pants, ivory shirt, navy bow tie with suspenders, and dark charcoal jacket.
Ushering guests to their seats were Robbie Broussard, brother-in-law of the bride; Randall Schmid and Bryan Leger, cousins of the groom; Jason Lalande and Michael Charles Hundley, friends of the groom.
For her daughter’s wedding, Karon Curtis Cook wore a draped evening gown in a light grey tone designed with corded embroidery and tulle on the bodice. She was presented a handheld bouquet of roses, apricot stock, wax flower and fillers.
The groom’s mother, Andree Mayeaux Brown selected a classical-styled, two-piece ensemble featuring a cyan blue shantung jacket with a slender shawl collar and three-quarter length sleeves adorned with four large rhinestone buttons. An ankle-length, slim skirt of the same cyan blue shantung finished her look. She was also presented a handheld bouquet of roses, apricot stock, wax flower and fillers.
Immediately following the wedding ceremony, the couple was honored during a reception held at the historic Wearhouse Event Center in Rayne. The navy and ivory color theme continued during the reception as lace table runners of navy were noted atop guest tables, while ivory chair covers were held with navy chair sashes. Latterns gave the area a natural ambiance against the traditional background of the historic building.
Among the refreshments provided was the bride’s cake, a white five-tier confection accented with cascading white flowers. Each layer was created of a different flavoring and filling. Serving the cake was the bride’s godmother, Cathy Hundley.
The groom’s cake was a funfetti cake with traditional chocolate icing topped with a miniature replica of the groom’s crawfish boat. The cake was served by the groom’s godmother, Yvette Hoffpauir.
Following a wedding trip to Hawaii and Bora Bora, the couple will reside in Crowley.
Prior to the wedding, a rehearsal dinner was held Tuesday, June 14, at Mo’s Crawfish hosted by the groom’s parents. Guests were served boiled crawfish with all the trimmings, along with assorted desserts and beverages.