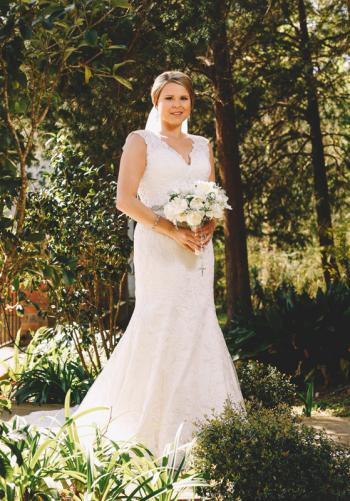 Leah Michelle Pousson of Iota and James Trey Thomas of Lake Arthur were united in holy matrimony on the evening of Friday, April 15.
Msgr. Ronald Groth officiated the 6:30 p.m. nuptials at St. Joseph Catholic Church in Iota.
The bride is the daughter of Hal and Charlotte Pousson of Iota. She is the granddaughter of Denis and Ruth Dupont of Egan, and of the late Leven and Lorraine Pousson of Iota.
Leah is a 2005 graduate of Iota High School and a 2010 graduate of McNeese State University, where she earned a Bachelor of Science degree in nursing, with a minor in criminal justice. She is presently employed with Jennings American Legion Hospital.
The groom is the son of Jimmy and Bridget Thomas of Lake Arthur. His grandparents are Mr. and Mrs. Mickey Hoffpauir of Lake Arthur and the late Mary Louise Hoffpauir, and Jean Thomas of Welsh and the late Dr. Jim Thomas.
Given in marriage by her father, the bride was beautiful in an ivory lace fit and flare gown featuring a V-neckline and thick lace cap sleeves. The sheer back was accented with covered buttons winding down the center, with lace panels edging the sheer keyhole. A belt of Swarovski crystals and pearls finished the dress by defining it at its natural waistline. Leah paired her gown with a single layer fingertip veil edged with crystals and pearls
She carried a bouquet created by her maternal grandmother of ivory peonies, Caroline roses, freesias, plumerias and baby’s breath that incorporated her St. Therese medal and a sterling and crystal rosary that had belonged to her paternal grandmother. The stems were gathered in an ornate applique wrap adorned with clear, faceted rhinestones.
Lauren Cart, friend of the bride, served as maid of honor. Bridesmaids were Heather Smith, friend of the bride; Ashlen Pousson, sister-in-law of the bride; Ashley Perry, friend of the bride; Jill Ferverjean, sister of the groom; and Anna Key, niece of the groom.
The attendants were clad in floor length mint green gowns with illusion one shoulder corded lace bodices and flowing mesh skirts with fashionable slits.
Emilia Pousson, niece of the bride, served as flower girl. She wore a beautiful dress with a fitted bodice with lace overlay that cascaded into a slightly flared skirt. Designed and handmade by the bride’s maternal grandmother, it featured a sweetheart neckline and was finished with sweep train.
Sharing the duties of best man were Mike Feverjean and Kyle Klein, friends of the groom. Standing as groomsmen were Brent Pousson, brother of the bride; Jake Cooper, cousin of the groom; Derrell Feverjean, brother-in-law of the groom; and Kevin Pousson, cousin of the bride.
Leven LeJeune, cousin of the bride, served as ring bearer.
Ushers were Shannon Guillory, Corey Feverjean, Holie Leleux and Brett Lilley, all friends of the groom.
Music for the ceremony was provided by vocalist Patrick Menard.
Following the ceremony, family and friends joined the newlywed couple for a celebratory reception at the Grand Marais in Jennings.
Connie LacCombe, godmother of the bride, served the bride’s cake. The groom’s cake was served by the groom’s godmother, Stephanie Benoit, and his aunt, Cindy Cooper.
A rehearsal dinner was hosted by the groom’s parents on the evening prior to the wedding.
The couple will reside in Welsh.