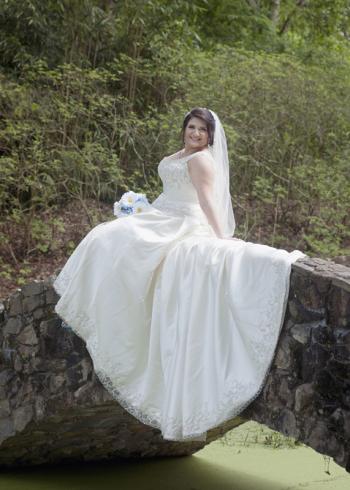 The Rice Festival Building in Crowley was the setting on Saturday, June 13, for an afternoon wedding ceremony uniting Brittany Dawn Rosinski and Chevy James Foreman in marriage.
The double-ring ceremony was officiated by Sarah Corie.
The bride is the daughter of Kevin and Bonnie Rosinski of Scott. Her grandparents are Dolphy and Beulah C. Alleman of Scott and Eugene and Bernita R. Rosinski of Duson.
She is a 2007 graduate of Notre Dame High School of Acadia Parish, a 2011 graduate of Remington College with a degree in medical billing and coding, and is presently employed as the banquet coordinator and secretary at Chef Roy’s in Rayne.
The groom is the son of Sharon Potier of Lafayette and Timothy Foreman of Scott. His grandparents are Clyde and Glenda C. Potier of Lafayette, Anna D. Savoy of Duson and the late Norris James Foreman of Duson.
He is a musician employed as a bass player for the Wayne Toups Band.
The hall was decorated with a breathtaking, elegant theme of black and white, accented with Malibu blue and damask print with white linen and sheer drapes. Chandeliers, candles and lamps provided a hint of glitz and vintage glamour.
Guests were ushered by John Mier, godfather of the bride.
For her wedding day, the bride wore a ballgown of ivory satin designed with a silver embroidered and crystal beaded corset bodice. The off the shoulder sheer beaded neckline was fastened with self covering buttons to the back, from which fell a silver embroidered and crystal embellished outline for a chapel length train. A crystal and pearl headpiece held a finger-tip veil featuring a silver embroidered hemline to match her gown.
For the reception, the bride changed into a party swing dress inspired by the 1940s. The unique design was of ivory taffeta, perfect for twirling the night away.
She carried a bridal bouquet of blue hydrangeas and white daisies with rhinestone-wrapped stems and a monogrammed ribbon. Her grandmother’s crystal rosary was intertwined throughout the bouquet.
Attending Brittany as maid of honor was Brittany Leger. Bridesmaids were Lauren DeRouen, Gabrielle Daspit, Brittany Guidroz, Whitney Duplechin, Ashley LeBlanc, Amber-Lena Foreman and Tayla Foreman. Avery Meche was the junior bridesmaid.
All bridesmaids wore Malibu blue, knee-length dresses in the style and fabric of their choice while carrying a single blue hydrangea and white daisies.
Kinsley Mier, daughter of Justin and Bridget Mier of Lafayette, was flower girl. She wore an ivory, floor length dress adorned with a large Malibu blue bow on the backside. She carried a blue hydrangea and white daisy pomander ball.
Attending the groom as best men were Wyatt Foreman and Dustin Sonnier.
Groomsmen were Ross Richard, Jonathon Lanclos, Bryson Rosinski, Thadd Foreman, Dustin Ardoin and Jason Bergeron.
Ben and Cal Rosinski were junior groomsmen.
Serving as ring bearers were Cort Meche, son of Jessica and Virgil Meche of Church Point, and Levi Foreman, son of Brandi and Wyatt Foreman of Carencro. Both ring bearers are godchildren of the couple.
Immediately following the wedding ceremony, the couple was honored during a reception.
Among the refreshments was the bride’s cake, a square, four-tiered white confection with white icing and different fillings in each layer. The cake was lined with a rhinestone ribbon on the bottom of each tier. The top tier was topped with a crystal letter “F.”
The groom’s cake was an actual size replica of his bass guitar. The red velvet cake was topped with cream cheese icing.
Following a honeymoon to Nashville, the couple will reside in Scott.