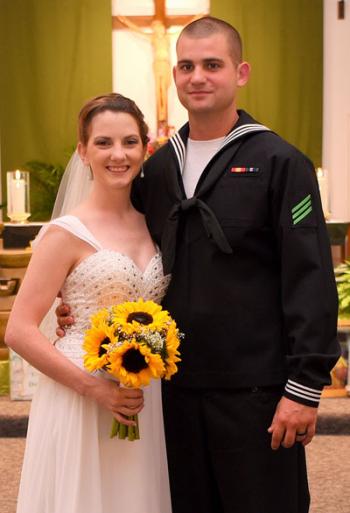 LAFAYETTE - Holy Cross Church was the setting on Saturday, July 2, 2016, for a wedding ceremony uniting in marriage Shelbie Victoria Manuel of Lafayette and Jude Patrick Duhon of Rayne presently stationed in Pensacola Navy Air Base in Florida.
The bride is the daughter of Darrel and Vicky Manuel of Lafayette, and granddaughter of Jackie Chapman, also of Lafayette. She is a 2011 graduate of Lafayette High School and a 2016 graduate of The University of Louisiana at Lafayette.
The groom is the son of Dr. Neal and Mrs. Susan Duhon of Rayne. His grandparents are Doris Duhon of Abbeville, the late Edwin Duhon, Lawrence LeBlanc Sr. of Rayne, and the late Jane LeBlanc. He is a 2007 graduate of Notre Dame High School of Acadia Parish in Crowley, a 2012 graduate of The University of Louisiana at Lafayette, and is presently serving his country as a member of United States Navy.
Celebrating the ceremony was Deacon Ken David. Scriptures were recited by Andrew Manuel and Matthew Manuel, brothers of the bride.
For the ceremony, musical selections were provided by Elizabeth Nix (vocals and piano) and Andrew Manuel, brother of the bride (“Ava Maria” on saxophone).
Escorted by her father, the bride wore full-length sheath wedding gown designed with a sweetheart neckline and sheer capped sleeves. The fitted bodice was encrusted with beading, rhinestones and pearls, while the hemline flowed into a chapel-length train. A rhinestone hairclip held a fingertip veil of sheer illusion. She carried a gathered bouquet of traditional sunflowers accented with baby’s breath.
Attending as maid of honor was her best friend, Caitlin Thompson. Bridesmaids were Carolina Manuel, bride’s sister-in-law, and Natalie Daigle, friend of the couple.
Bridal attendants each wore a navy, knee-length dress designed to their individual liking while carrying a simple sunflower clutch bouquet.
Attending the groom as best man was his older brother, Matthew Duhon. Groomsmen were Elliot Gilbert and Seth Daigle, friends of the groom.
Male attendants wore light gray tuxedoes with navy bow tie and suspenders. The lapel was noted with a boutonniere of miniature sunflowers.
Serving as ring bearers were Michael and Phillip Duhon, nephews of the groom, and Michael Manuel, nephew of the bride. The trio, all born on the same day, wore navy shorts, a white linen shirt, gray suspenders and yellow bowtie for the wedding.
For her daughter’s wedding, Vicky Cross Manuel wore a knee-length dress of choice in a mint green tone.
The groom’s mother, Susan LeBlanc Duhon selected a knee-length dress of choice in an ivory tone with gold lace trim.
Immediately following the wedding ceremony, the newlyweds were honored during a reception held at Warehouse 535 in Lafayette.
Among the refreshments provided for guests was the bride’s cake, a three-tier white butter cream confection decorated with sunflowers. The cake was served by Charlene Cross, the bride’s aunt.
The groom’s cake was a red velvet confection topped with a miniature hunting theme. The cake was served by Therese Broussard, his godmother.
Prior to the wedding, a rehearsal dinner was hosted by the groom’s parents on Friday, July 1, at Fezzo’s in Scott.