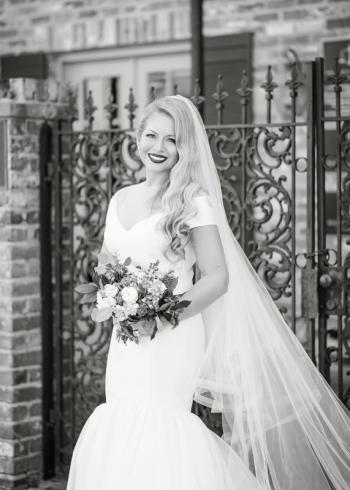 The beautiful Cathedral of St. John the Evangelist in Lafayette was the setting for the Friday, Oct. 2, wedding uniting Heather Rae Spallino of Crowley and Ryan Joseph Duplechain of Lake Charles.
Rev. Msgr. Keith DeRouen officiated the 7 p.m. nuptial ceremony.
The bride is the daughter of Debbie and Shane Spallino of Crowley. She is the granddaughter of Sandra Saucier Poppell of Statesboro, Georgia, and the late William Larry Poppell, and of Ethel Valdetero Spallino of Crowley and the late Salvador “Sam” Spallino.
She is a 2006 graduate of Notre Dame High School of Acadia Parish and a 2011 graduate of the University of Louisiana at Lafayette, where she earned a Bachelor of Science degree in nursing. She is presently employed with Advantage Travel Nursing and is enrolled as a student in the nurse practitioner program at the University of Louisiana at Lafayette, with an anticipated graduation date of 2017.
The groom is the son of Lee Anna and Cleve Joseph Duplechain of Lake Charles. His grandparents are Dorise Watson of Carlyss and the late Wes Watson and the late Rose and Cleve Joseph Duplechain Sr. of Lake Charles.
He graduated from St. Louis Catholic High School in Lake Charles in 2005 before attending the University of Louisiana at Lafayette, where he earned a Bachelor of Architecture degree in 2010 and a Master of Architecture degree in 2012. He is currently employed with Sabatier Architecture, LLC.
Music for the ceremony was provided by organist Tom Neil and trumpeter Will Green.
Given in marriage by her father, the bride wore a gorgeous ivory gown by Heidi Elnora. Featuring an off-the-shoulder illusion neckline and geometric back, the sophisticated dress boasted a stylish exaggerated trumpet silhouette. The back was finished with a row of covered buttons and a tulle chapel train, and the bride completed her look with a cathedral length veil.
In keeping with tradition, Heather wore the original wedding set of her paternal grandmother, “Mimi,” as “something old,” while her wedding dress and veil served as “something new.” A Mabe pearl ring loaned to her by her Aunt Janet was “something borrowed,” and her pearl and rhinestone garter was “something blue.”
The bride and her attendants carried whimsical bouquets of chocolate dahlias, White O’Hara roses, ranunculus, astilbe, burgundy and ivory spray roses and silver dollar eucalyptus. Entwined in the bride’s bouquet was a rosary that had belonged to her late paternal grandfather, “PaPa Sam.”
Samantha Spallino, sister of the bride, and Allison Roth, friend of the bride, served as maids of honor.
Bridesmaids were Shannon Spallino and Sydney Spallino, sisters of the bride; Virginia Whitley, Peyton Poppell, Bella Poppell, Meagan Citron and Jacquelyn Citron, cousins of the bride; and Allison Citron and Lindsey Rogers, friends of the bride.
The bridal attendants were clad in varied complimentary styles of blush and Bellini silk tulle gowns designed by Amsale. The maids of honor and the bride’s sisters were distinguished in nude-colored, beaded Art Deco gowns designed by Adrianna Papell.
Blake Poppell, Madison Poppell, Alyssa Poppell and Taylor Goodrich, all cousins of the bride, served as flower girls.
The duties of best man were shared by Cory Duplechain, brother of the groom, and Andrew Green, friend of the groom.
Standing as groomsmen were Jacob Belaire, Ross Byrley, Michael Donahoe, Edward Ellington, Daniel Hennigan, Stephen Winkles and Sloan Lamotte, friends of the groom, and Seth Citron, cousin of the bride.
Kogan Sarver and Harrison Citron, cousins of the bride, served as ring bearers.
Ushers were Travis LeGrand, friend of the bride, and Emile Ancelet and Thomas Murphy, friends of the groom.
Selected scriptures for the ceremony were read by Madeline Dupuis, friend of the bride, and Scott and Shawn Heape, cousins of the groom.
Offertory gifts were presented by Kathy Bertsch and Doug Valdetero, godparents of the bride.
Following the wedding, family and friends joined the newlywed couple for a reception at Acadian Village.
Out-of-town guests registered from Georgia, Tennessee, Maine, British Columbia, California, Texas, Nevada, Illinois, Oklahoma, Minnesota, Colorado, Washington D.C., and various points throughout Louisiana.
On the evening prior to the wedding, the groom’s parents hosted a rehearsal dinner at Jefferson Street Pub in Lafayette.
The couple will take a wedding trip to Paris and the Greek islands in June 2016. They are residing in Crowley.