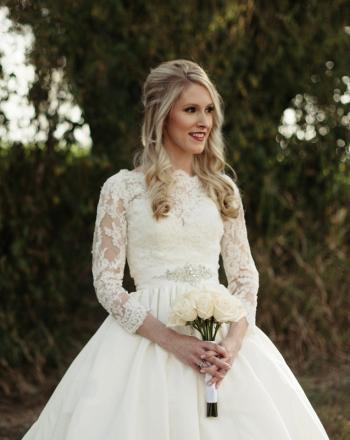 Couple to live in Lafayette after Vancouver Island trip
LAFAYETTE

Anne-Marie Wadlington and Tyler Seymour Pierret were united in the Sacrament of Holy Matrimony on Saturday, Dec. 5, at La Marquise Ballroom in Lafayette at 5 p.m. The celebrant for the ceremony was Father John Bedingfield.
The bride is the daughter of Christopher Wadlington and Angelique Wadlington of Lafayette. She is the granddaughter of Pat and Gwen Fontenot of Eunice and the late Dr. A.C. Wadlington of Farmerville and Jean Wadlington of Monroe.
The groom is the son of Kent and Betsy Pierret of Lafayette. He is the grandson of the late Mr. and Mrs. Wollen Falgout of Raceland and the late Mr. and Mrs. Octave Pierret of Lafayette.
Anne-Marie is a 2011 graduate from the University of Louisiana at Lafayette with a Bachelor of Arts degree in sociology and a 2015 graduate of LSU Health Science Center in Shreveport where she earned her Master of Science degree in occupational therapy.
Tyler graduated from Teurlings Catholic High School in 2005. He is a 2011 graduate from the University of Louisiana at Lafayette with a Bachelor of Science degree in business administration with a concentration in finance.
Escorted by her father, the bride wore an ivory regal taffeta ball gown with a sweetheart neckline designed by Essence of Australia and covered by a three-quarter length sleeve lace bolero by Justin Alexander and crystal beaded belt. She also donned a lace cathedral veil.
Attending as maid of honor was Brittany Hebert, friend of the bride. Bridesmaids included Breanne Fontenot, Kimberly Manuel, Katie Loupe, Leslie Moss and Ana Watkins. Her flower girl was her niece and godchild, Audrey Watkins.
Attending as best man was Bryce Darnall, friend of the groom. Groomsmen included Ryan Pierret, Seth Pierret, Grant Wadlington, Trent Wadlington and Justin Guidry. His ring bearer was the nephew of the bride, Jacques Watkins.
Musicians for the service included Lauren Baker, violin, and Emma Guidry, cello.
A reception immediately followed in the same location. The evening preceding the ceremony, a rehearsal dinner, hosted by the groom’s parents was held at Oakbourne Country Club in Lafayette.
Following a honeymoon in Victoria on Vancouver Island, British Columbia, the couple will reside in Lafayette.