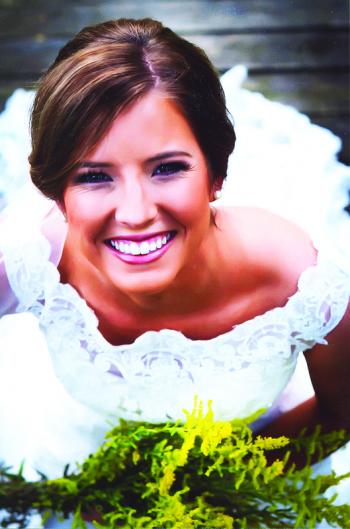 The groom is the son of Stacie Bordelon and Michael Bordelon, both of Rayne. His maternal grandparents are Gannol Zaunbrecher of Rayne and the late Kenneth Zaunbrecher, and his paternal grandparents are Naomi and Kenneth Bordelon of Rayne. Also a graduate of Notre Dame High School of Acadia Parish, he is currently serving in the United States Army as a specialist in explosive ordinance disposal at Fort Benning, Georgia.

Escorted to the altar by her father, the bride was gorgeous in a fit and flare ivory crystal satin gown with a tulle overlay. Beautifully embellished with intricate lace appliques adorned with Swarovski crystals and seed pearls, the dress featured an off-the shoulder, slightly scooped illusion neckline trimmed with a soft scalloped edge. A stunning illusion back and court length train completed the elegant gown.

The bride paired her gown with a classic fingertip veil of delicate illusion tulle.

Meghan Chiasson, sister of the bride, attended the bride as maid of honor.

With the exception of the bride’s sisters, the attendants were clad in floor length wine-colored gowns of silk Dupioni in various styles of their choosing. The sisters of the bride wore champagne-hued dresses of silk dupioni. They carried hand-tied bouquets of seasonal greenery and baby’s breath.

The girls were beautiful in heirloom dresses of white batiste with hand-stitched shadow embroidery trimming the empire bodices and an old-fashioned sash tied in the back. The dresses had special meaning, as they were worn by the bride and her sister in the bride’s godmother’s wedding nearly 20 years ago. The girls also wore angelic crowns of baby’s breath.

Royce Zaunbrecher, cousin of the groom, performed the duties of best man.

For her daughter’s special day, the mother of the bride, the former Rachel Boulet, selected a floor-length blush-colored satin gown featuring a sweetheart neckline and Venice lace back. A glittering Swarovski crystal belt created an empire silhouette that incorporated a sophisticated asymmetrically dropped waist.

The mother of the groom, the former Stacie Zaunbrecher, chose a full length fitted gown of peau de soi jadestone silk featuring a portrait neckline. A broach that had belonged to the groom’s great-grandmother adorned the asymmetrically pleated waist.

Immediately following the service, family and friends joined the couple for a reception held at the historic Warehouse Event Center in Rayne.

Music for the reception was provided by the band Creativity from Atlanta, Georgia.

The bride’s three-tiered traditional wedding cake featured different chocolate fillings and was trimmed with pearl-edged ribbon. It was topped with a natural wood monogram of the couple’s initials with a large letter “B” in the middle to represent the new family. The cake was served by the bride’s cousin Robin Menard.

For the bride’s single friends, her cake included pulls, a distinctly Southern tradition, attached to burlap ribbons edged with pearls.

The groom’s red velvet cake was decorated with a sportsman-styled camouflage fleur de lis reflecting the groom’s love of hunting and fishing. It was served by his godmother Amy Curole.

Out-of-town guests attending the event registered from Alabama and various points throughout Louisiana.

On the Monday evening prior to the ceremony, the groom’s parents hosted a reception dinner at Maison D’Memoire in Rayne. The menu included crawfish étouffée, green beans wrapped in bacon, salads and rolls. A sweets table featured a variety of the bride and groom’s favorite mini desserts including Oreos decorated with chocolate to resemble gown-clad brides and tuxedo-wearing grooms, chocolate chip cookies, strawberry “double doozies” and red velvet “double doozies.”

Following a skiing trip to Snowmass, Colorado, the couple will make their home in Fort Benning, Georgia.