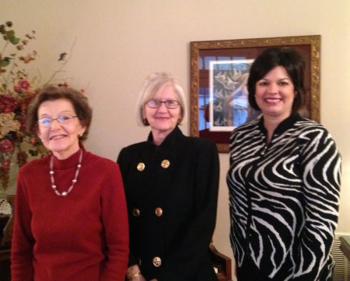 PHOTO SUBMITTED
Hostesses for the March meeting of the Three Ten club were, from left, Peggy Sandidge, Mary Beth Geesey and Letza Fogleman.

The February meeting of Three Ten was held at the home of Letza Fogleman, with Peggy Sandidge and Mary Beth Geesey serving as co-hostesses.

The meeting was led by President Sandy Melancon. Following the business portion of the meeting, club members Patti Lawrence, Alice Whiting and Isabella de la Houssaye each took a few minutes to tell a little bit about their lives during the entertaining “Getting to Know You” segment. It was noted that the majority of the club’s membership was made up of women who are not Crowley natives, making for a diverse and interesting group.

In keeping with the year’s theme “Criminal Minds and the Demons that Drive Them,” Peggy Sandidge began the program with a talk about Heinrich Himmler, one of the architects of the Holocaust. The group was given a look into the mind, motivation and mission of this criminal. Next, Mary Beth Geesey shared information on the life and loathsome deeds of Josef Mengele, another major player in the murderous Nazi regime. Both were highly intelligent, but remorselessly used their talents and skills to gain personal power in a vicious, misguided cause and were personally responsible for the deaths of untold numbers of innocent human beings. Discussion followed.