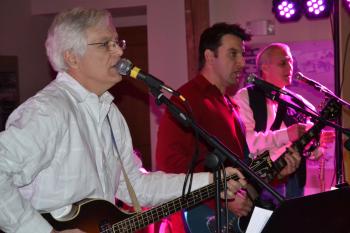 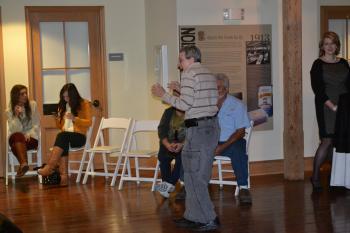 CROWLEY - Allison Clarke and the others who organized the sixth annual the Taste of Crowley expressed some concern that Thursday night’s Notre Dame High School playoff game may affect attendance at the event. While the actual number of people who attended was unknown, those who came to experience some of Crowley’s finest food and the music of the Get Back Band and Hunter Lambert certainly made the most of it.

In short, the event, which was created to show off some of Crowley’s finest restaurants, sent people home tapping their feet with full stomachs. They also left knowing that they had just attended a wonderful party.

By the time the Get Back Band (consisting of Jack Miller, Chris Trahan, Mike Dupuis, Carey Chopin and “birthday boy” Tim Mader) took the stage, most of the crowd had already had an opportunity to enjoy the food. They were ready to party.

And the band delivered.

Cranking out some of the most popular songs of the 60s and 70s, the Get Back Band had the crowd dancing throughout their performance.

With Get Back Superfan Ann Mire getting the ball rolling, the dance floor area filled up quite nicely.  The only pause in the crowd’s energy came when a guitar shaped cake was delivered to Tim Mader, who turned 65 on Thursday.

Mader, who serves as Crowley’s city engineer, did not appear to be a man on the verge of retirement as he and Miller, the band’s cofounders, took turns with other members of the band in belting out some all-time classics.

Accomplished violinist Hunter Lambert performed first, entertaining the crowd while they ate fried catfish, several different pastas and enchiladas that had many returning for second and third helpings.

Lambert, who has been known for his violin expertise for several years, also delighted the crowd with his near perfect singing voice that he has added to his already impressive repertoire.

Judging by crowd’s response to the music and the food, it is obvious that Taste of Crowley has joined The Gumbo CookOff and Christmas in Crowley as local events that are increasing in popularity with each passing year.