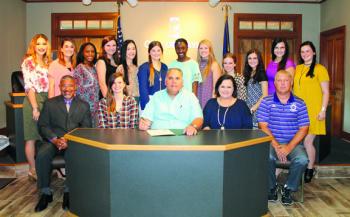 The court has been selected, plans are complete, and alumni of Rayne High will return to their alma mater next week for the 2016 annual Homecoming programs and activities.
During ceremonies Thursday morning, Mayor Chuck Robichaux signed the official proclamation declaring Sept. 19-23 “Rayne High School Homecoming Week” in the City of Rayne.
Graduates of classes ending in “6” will be honored during a number of events and programs, especially Homecoming Day events which will be dedicated to these former students.
In addition to daily on-campus activities to be enjoyed by the student body and faculty, the annual Homecoming Parade has also been finalized. The event invites all RHS classes and alumni to participate in the 6 p.m. special Homecoming event on Thursday, Sept. 22, following its usual route from Central Kindergarten and ending at Rayne High School where the annual community-wide pep rally and Powder Puff Game will be held.
Also invited to participate in this year’s parade are all Rayne High former students who will join the Homecoming Court. All parade participants are needed in line by 5:30 p.m. at Central Kindergarten and be ready for the 6 p.m. start.
Friday’s filled Homecoming Day schedule of events will include: Annual Alumni Reception at 10 a.m. in school library; Pep Rally at 2 p.m. in north gym; Homecoming Court introductions at 6:45 p.m. prior to football game at stadium; Homecoming Game at 7 p.m. against DeQuincy High School with naming of the new 2016 Homecoming Queen during halftime ceremonies.
The group of 12 seniors honored as members of this year’s Homecoming Court are Destiny Alleman, Natalie Alleman, Kalon Bryd, Tajané Butler, Jada Castille, Whitney Comeaux, Chloe Duhon, Brailey Guidry, Naomi Istre, Madison Lavergne, Brooklyn Mire, and Blaire Thibodeaux.
Rayne High cheerleaders will be selling school-related items during the alumni reception. Alumni can also be on the lookout for pictures with the RHS Wolf during their tour of the school grounds.