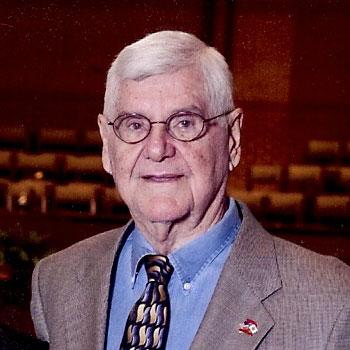 Funeral services will be held at 10:30 a.m. on Monday, October 13, 2014, at a Mass of Christian Burial at St. Joseph Catholic Church in Rayne for Charles W. “Moon” Chappuis who died at 8:00 a.m. on Wednesday, October 8, 2014, at his residence.
Entombment will be in St. Joseph Cemetery #2 in the Mausoleum.
The Rev. Kendall Faulk, pastor of St. Joseph Catholic Church, will be the celebrant of the Mass and will conduct the funeral services.
Readings from the Holy Scripture will be given by his daughter, Mary Gayle O’Connell, and his son, Dr. Charles W. Chappuis, Jr. Gifts will be brought up to the altar by his granddaughters, Courtney Chappuis Farmer, Lindsey Rogers, Adrian O’Connell, Catherine Chappuis, Kate O’Connell, Natalie Jurisich and Erin Holland. The musical selections will be, I Believe, On Eagle’s Wings, Here I am Lord, The Battle Hymn Of The Republic and The Our Father.
Born in Rayne, Mr. Chappuis was the son the late Archie A. Chappuis and the former Elise Daboval.
He is survived by his wife of 63 years, the former Carmelite (Lita) Brown; one son and five daughters and their spouses, Dr. Charles W. Chappuis, Jr. and Cynthia Glass, MD, Sunset, Anne Leonards and Leo J. Leonards, Joan Jurisich, Tracy Moody and Kevin Moody, Lafayette, Lynn Rogers and Michael Rogers, Crowley and Mary Gayle O’Connell and Patrick O’Connell, Overland Park, Kansas, brother Donald Chappuis, Brevard, North Carolina. Other survivors include thirteen grandchildren, Courtney Chappuis Farmer, Catherine Chappuis, Adam Leonards, Benjamin Leonards, Erin Jurisich Holland, Joel Jurisich, Natalie Jurisich, Adrian O’Connell, Katherine O’Connell, Lindsey Rogers, Tyler Rogers, John Thomson and Michael Thomson and great-grandchildren, Benjamin Leonards, II, Joseph Charles Leonards, Emma Leonards, Noah Leonards and Kaidence Rogers.
He was preceded in death by his parents; an infant son, Joseph Chappuis; his brothers, Richard Chappuis, Brigadier General Steve Chappuis, Dr. Jack Chappuis; and his sister, Dorothy Kemper.
After graduating from Rayne High School in 1942, Mr. Chappuis entered LSU in Baton Rouge.  He was a member of Alpha Tau Omega Fraternity.  He was in Company A, ROTC.  His schooling was interrupted when he volunteered for the service in 1943.  He was ordered to Camp Polk and he then received a first alternate appointment to West Point.  As an alternate he attended Lafayette College in Easton, Pennsylvania and Cornell University in Ithaca, New York.  Mr. Chappuis was advised that he would enter West Point providing his principal failed the mental or physical tests.  However, his principal passed the tests and Mr. Chappuis was ordered to Ft. Benning, GA. for a weapons course and then he attended and graduated from Officers Candidate School as a Second Lieutenant.  He was a U.S. Army Veteran of World War II having served with the 28th Cavalry Rcn. Sq. (Mecz) in Germany and retired with the rank of Major.  He was awarded with the following medals, World War II, American Campaign, Army of Occupation, Good Conduct and the European-African Middle Eastern Campaign.  He later received the Louisiana Veterans Honor Medal from Governor Jindal.
Mr. Chappuis graduated from Louisiana State University in Baton Rouge receiving a Bachelor of Science in Agriculture in 1949.  He later entered Law School in 1952 and received a Bachelor of Law Degree from LSU in 1955 and a Juris Doctor Degree in 1968.  He entered the practice of law with his uncle, Abner C. Chappuis and later into a law partnership with Judge Denald A. Beslin.  He was the attorney for the City of Rayne for approximately 28 years and attorney for Rayne Building & Loan Association.  He retired from the practice of law in 1991.
He was a member of St. Joseph Catholic Church and served as a Lector for many years.  He served as chairperson for the 125th St. Joseph Anniversary Committee.  He was an Honorary Member and Grand Knight of the Knights of Columbus, Council 1897, member of Knights of Columbus, Fourth Degree, Msgr. Mollo Assembly No. 325, member and past Judge Advocate of American Legion, Arceneaux Post No. 77, a member of Veterans of Foreign Wars, Harold Bossley Post No. 6720, past President of Acadia Parish Bar Association, past President of Rayne Lions Club, Charter member and past Vice President of Notre Dame High School, Director for forty six years and past Vice President of Rayne Building & Loan Association, former director of Rayne State Bank & Trust Company for 17 years and member of Acadiana Retired Officers Association and member of Military Officers Association.
Mr. Chappuis loved to travel.  He visited England, Scotland, Wales, Ireland, several countries in Europe including East Germany before the wall came down, Morroco, Gibralta, Mexico, Alaska, Kauai, Maui, Hawaii, Oahu, Israel, Japan, Hong Kong and China.  While in Hong Kong, he and his daughter, Anne, walked on the wall of China.  Mr. Chappuis’ favorite trip was to the Holy Land with his daughter, Mary Gayle, in 2000.  At the 5th station of the Way of the Cross, Jesus had put his hand against the wall to keep from falling.  The stone has rubbed away from so many pilgrims touching the spot where Jesus’ hand touched. Mr. Chappuis placed his hand directly in the spot where Jesus had his hand.
The family would like to thank the staff of Louisiana Hospice and Palliative Care, Jennings, Louisiana, especially Catha Duhon and Kelly Breaux for their excellent care and compassion.
Pallbearers will be his six grandsons. Honorary pallbearers will be Braxton I. “BI” Moody, III, Richard D’Aquin, Judge Denald A. Beslin, Henri Billon, Milo Nickel, and the directors of Rayne Building & Loan Association. In lieu of flowers, the family requests donations be made to Rayne Catholic Memoral Fund and Notre Dame High School in Crowley.
A rosary will be recited Sunday, October 12, 2014, at 6:00 p.m. at Gossen Funeral Home, Rayne, LA.
Visitation hours will be held at Gossen Funeral Home in Rayne, LA, Sunday, October 12, 2014, from 9:00 a.m until 8:00 pm and Monday, October 13, 2014 from 8:00 am until 10:00 am.
Friends may view the obituary and guestbook online at www.gossenfuneralhome.net.
Arrangements have been entrusted to Gossen Funeral Home, Inc. of Rayne.