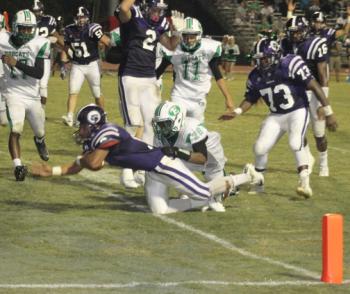 Rayne's Trent Winbush dives for the endzone as he scored the winning touchdown for the Wolves Friday, recording a 28-27 win over the Eunice Bobcats. Winbush recorded 123 rushing yards on 25 carries during the Rayne win. (Acadian-Tribune Photo by Lisa Soileaux)

From the cool, Friday night air to the scoreless first quarter, a true football fan knew Rayne’s 28-27 win over Eunice High was going to be the things that Friday night football was made of.
“There’s nothing else to say but tonight was a great ballgame,” stated Rayne Head Coach Curt Ware following the Wolves’ one-point win over Eunice High.
“Both sides had good plays,” according to Ware as he looked back over five lead changes between the Wolves and Bobcats, resulting in one for the books.
“This is one of those games that it’s a shame that someone has to lose because both teams left it all out on the field tonight.”
Following a scoreless first quarter, Eunice was quick to score in the beginning of the second quarter with a 22-yad pass completion from quarterback Jaden Brasseaux to receiver Dashawn Vigers. The point after saw the Bobcats take a short-lived 7-0 lead.
The kickoff was recovered by Eunice at the Eunice 40-yard line, but the very next play, a long Brasseaux pass, was intercepted by Rayne’s Zach Fontenot at the 25, beginning Rayne’s first scoring drive of the night.
Johnny Deculit, Darien Harmon and Trent Winbush chipped away the field, setting up a touchdown run from Harmon and the extra point off the foot of Morgan Manuel for a 7-all ballgame midway through the second quarter.
A couple of drives by both teams closed out the first half of play with a 46-yard touchdown pass from Eunice’s Brasseaux to Jaden Brasseaux for a 13-7 Bobcat lead heading into the lockroom.
“That is where I saw our guys, our leaders come through,” noted Ware of f Wolves. “We were down at the half, but our guys were still fighting.”
Behind a strong front line, Rayne drove down the ballfield behind runs by Winbush, Harmon and Jaylon Reed.
A completion from Rayne’s Donald Doucet to Johnny Deculit set up a Doucet quarterback sneak from four yards out for a 13-all tie. Manuel’s extra point gave the Wolves a slim 14-13 lead.
The Bobcats took advantage of an interception on the wrong side of the field, setting up a 10-yard TD run by Avery Lee for a 21-14 Eunice lead heading into the final quarter.
A 33-yard return by Zach Fontenot set-up Rayne’s next scoring drive, resulting in a 17-yard touchdown run by Deculit. Manuel’s extra point tied up the balgame once again at 21-all with 10 minuted remaining.
Eunice’s very next drive saw Avery Lee take a handoff from eight yards out and hit the endzone for another Bobcat score. The extra point attempt was blocked by Wolf Cameron Gibson and the Bobcats held a 27-21 lead, that dangerous six-point lead, with seven minutes remaining.
Rayne’s very next drive saw Winbush and Harmon rush and Doucet find Deculit for a completion, setting up another touchdown run by Winbush, who punched it through two defenders from three yards out for the score, knotting the ballgame at 27-all. Manuel’s extra point gave Rayne the one-point lead they needed for the lead at the five-minute mark.
The Bobcats ate up the remaining five minutes of play with a long drive against a stiff Rayne defense. With a deflected pass by Gibson, key tackles by Tony Roberts and Richard Breaux, Rayne held strong inside the red zone at the six yard line, forcing Eunice to attempt a field goal as time was running out. Gibson got his hand up for a block once again, giving the Wolves a 28-27 win with only seconds remaining to take a knee.
Leading the Rayne rushing corps was Winbush with 123 yards on 25 runs, along with the evntual wunning touchdown. Harmon recorded 20 carries for 116 yards and a touchdown. Deculit had 55 yards on four carries with a touchdown.
Doucet connected with four completions for 97 yards. He also added a rushing touchdown.
Receivers were Deculit (2-54), Reed (1-43) and Winbush.
Tony Roberts led all tackles on the night with 9 1/2, including 6 solos and 7 assists.
Deculit pulled double duty with 6 tackles, 5 solos and 2 assists, while Fontenot recorded 5 1/2 tackles with 5 solos and 1 assist.
Completing the Rayne defense were Richard Breaux (3), TorinBenoit (2), Marlon Foreman (2), and Cameron Gibson, Antonio Gabriel, Darian Wilridge, Jaylon Reed, Tyreece Beverly, Darien Harmon, Jamian Evans, Carl Davis and Anthony Granger
Manuel was 4-for-4 with extra points, while Doucet booted two punts with a 26-yard average.
Zach Fontenot led punt returns with a 21.5 average, followed by John Daigle with a 12-yard average.
“We had some guys step it up tonight and it paid off big,” Ware continued. “Our guys never gave up, not for one minute, and that’s what I admire about this team. They’re in it for the long haul, work hard every day, and are showing improvement every week.”
Ware and the Wolves will hit the road Friday for their district opener in Lake Charles where they will face LaGrange High. Kickoff is 7 p.m.