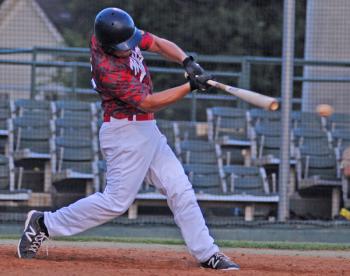 Crowley’s Kaleb Istre turns on a pitch Monday during the Millers’ 8-6 loss to the Opelousas Indians at Miller Stadium. The Millers return to action next Thursday when they travel to Opelousas to take on the Seminoles at 7 p.m.

CROWLEY – It was a game that came down to which team would catch the most breaks and unfortunately for the Crowley Millers, it wasn’t them.
The Millers saw a one-run lead fall by the wayside when the Opelousas Indians rallied for four runs in the top of the seventh inning and then held on for an 8-6 victory Monday evening at Miller Stadium.
“For us, it just came down to the little things and we just didn’t do enough of those things right,” said Millers’ coach Corde McCall. “We had chances with runners in scoring position and we didn’t tag; we had a routine ground ball in the infield with a lead and we didn’t make the play……and we pitched ourselves into jams by not getting ahead in counts early.
“That’s the little things in baseball that you can’t do and expect to win. And that’s something that we didn’t do a good enough job of tonight.”
The Millers took a 1-0 lead in the fourth inning when Mackay Mouton singled and scored on a double by Jacob Mooney.
But that lead didn’t last long.
The Indians responded with three runs in the top of the fifth on two hits and two walks to wipe it out.
Drew Brown started the rally with a one-out double to left field off Millers’ starter Mackay Mouton. Back-to-back walks then loaded the bases for T.J. Venable, who drilled a liner back to the mound. The ball went off Mouton’s glove and slipped into right field, allowing all three runs to score.
The Indians added another run in the top of the sixth on an RBI double by Drake Helton to push the lead to 4-1
The Millers weren’t about to go down without a fight though.
Mouton and Mooney led off the bottom of the sixth with back-to-back singles before the Millers caught a break on Jon Riley Mouton’s grounder to shortstop. The ball came off the lip of the grass and took a high bounce over the head of the shortstop for a single that allowed Mackay to score. Kaleb Istre followed with a single before Sam Veillon reached base on an error that plated another run.
Bryce Brandon then singled in a run to tie the game at 4-4 and Royce Zaunbrecher plated the go-ahead run on a fielder’s choice.
The Indians rallied again in the top of the seventh after catching a big break when leadoff man Matt Collins reached base on an error. Cy Bryson then walked and T.J. Venable drilled a 3-0 fastball to center field to tie the game.
The Indians weren’t close to being done, though.
Andy LaFleur, who was pitching in relief of Spencer Noel, helped his own cause with an RBI double to left field.
Kyle Habetz took over for Zaunbrecher with the bases loaded, but the Indians pushed across two more runs on a wild pitch and a groundout.
“Anytime you let a leadoff runner get on when you should have had him out, it’s disappointing and it really disrupts the flow of the game,” said McCall. “And then, again, we got in bad counts; they knew they were getting fastballs, they saw them and they hit them. That’s what good teams do and they have a pretty good team with good hitters and they were able to take advantage of our mistakes late in the game.”
The Indians sent Venable to the mound to close out the game in the bottom of the seventh inning, but the hard-throwing southpaw had control issues and walked the bases loaded with one out.
He then hit Veillon to plate a run before giving way to Kurt McKissick, who got out of the jam with a grounder back to the mound and a grounder to shortstop to end the game.
“Our guys played their hearts out, but it just came down to execution,” said McCall. “But it was great to see the fight in them late in the game.”
In all, the Millers actually outhit the Indians, 10-7.
“Yeah, we had a number of hits, but it comes down to when they occurred,” said McCall, whose team stranded eight base runners. “We just struggled to string hits together, especially early on.
“I mean we hit the ball well, but we just weren’t able to get a really big hit in key situations.”
Mooney and Jon Riley Mouton each had two hits, including a double and an RBI, in the loss while Kaleb Istre and Mackay Mouton each had two singles. Brandon singled and drove in a run and Luke Anclete had a bunt single.
The Indians were paced by Venable and LaFleur with two hits each while Brown, Helton and Cy Bryson each had one hit.
The Millers will now have a week long layoff before they hit the field again. They will travel to Opelousas next Thursday to take on the Seminoles in a game that was rained out last week.
The Indians have two games against the Seminoles this week and can lock up the district title by winning both of those contests.