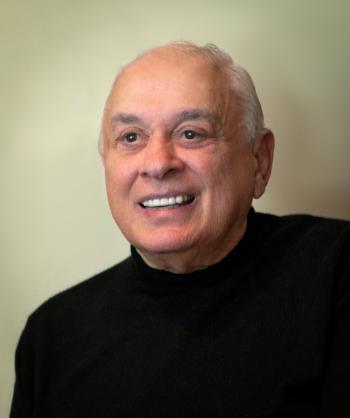 Msgr. Keith DeRouen, principal celebrant, along with Msgr. Paul Metrejean, Msgr. Charles Dubois, Fr. Bryce Sibley, Fr. Mikel Polson and Right Rev. Herbert J. May will officiate for the services. The family requests visiting hours Thursday from 4:00 p.m. to 8:00 p.m. and Friday from 8:30 a.m. to 9:45 a.m. A rosary will be recited Thursday at 6:00 p.m. at Geesey-Ferguson Funeral Home. Burial at Woodlawn Mausoleum will be private.

Edmund Michael Reggie was born July 19, 1926, the youngest child of Fred and Victoria Andraous Reggie who immigrated to Crowley from Lebanon in 1920. Both of his parents predeceased him. He is survived by his wife, Doris Boustany Reggie, whom he married on June 17, 1951; and he is survived by their six children, eleven grandchildren and two great grandchildren.

Edmund graduated from St. Michael High School and was awarded the American Legion Medal.  He represented his school at Pelican Boys’ State, setting the stage for a political career which began there when he was elected the Outstanding Senator. While in high school he attained the rank of Eagle Scout with Bronze, Gold and Silver Palms.

He went on to Southwestern Louisiana Institute (SLI), now the University of Louisiana at Lafayette, where he earned an academic scholarship and completed his Bachelor of Arts degree. At SLI he was an honor student and was elected to Blue Key National Honor Fraternity. He was active in debate and public speaking and for two successive years he was declared the state and national champion intercollegiate orator.  In his senior year he was awarded the university’s Sweepstakes Award for having won more forensic speech events than any other student. He attained Special Distinction in Pi Kappa Delta National Speech Fraternity. He was named to Who’s Who in American Colleges and Universities. He was a member of Phi Kappa Theta fraternity and was elected to membership in Alpha Omega as the university’s Outstanding Alumnus. He was Sports Editor of The Vermilion, SLI’s weekly newspaper, and of L’Acadien, the college annual. Reggie received his Bachelor of Arts degree in 1946.

He attended Tulane Law School and was awarded the Eugene D. Saunders Scholarship for Legal Study. To help pay for his law school expenses he taught Speech in the College of Arts and Sciences at Tulane. He received his Juris Doctor degree from Tulane in 1949.  In later years he was named Distinguished Alumnus of the Tulane Law School and was elected to Honorary Order of the Coif. He was a member of the Paul Tulane Society, an organization of significant contributors to the university.

After law school Reggie began his law practice in Crowley.  At age 24, in 1950, Reggie became City Judge of Crowley, and was the youngest judge in America. He served two terms as president of both the Louisiana City Judges Association and the Louisiana Juvenile Judges Association. Upon becoming judge, he immediately desegregated the seating of his courtroom and was one of the first Louisiana judges to do so.  Reggie’s Crowley City Court was named by the American Bar Association first in the nation for court administration among cities the size of Crowley. After 26 years on the bench he resigned to turn his efforts to other undertakings.

When he was President of the Acadia Parish Bar Association he initiated the first Red Mass outside of New Orleans, an annual celebration of the opening of the U.S. and Louisiana Supreme Courts. He served as Chairman of the Chief Justices’ Special Commission to Study Constitutional Revision of Special Courts in Louisiana, and served as ad hoc judge on the Louisiana Third Circuit Court of Appeal by appointment of the Louisiana Supreme Court. His love of the law also took him to Church Canon Law where he worked as a volunteer in the Church Tribunals of the Dioceses of Lafayette and Lake Charles dealing with marriage cases.

Judge Reggie was a lifelong Democrat, something he was fond of saying he inherited from his father who was a strong supporter of Franklin D. Roosevelt. He served two terms as a Member of the Democratic State Central Committee.  Reggie became a Louisiana delegate to the 1956 Democratic National Convention. It was there that he met and became friends with Massachusetts Senator John F. Kennedy.  Reggie was instrumental in persuading the delegation to cast its votes for Kennedy. The episode began a lifetime friendship with the Kennedy family.

In 1959, before Kennedy had announced his candidacy for president, Judge Reggie invited the senator and his wife Jacqueline to visit the International Rice Festival in Crowley. The Kennedys were visitors of Judge Reggie and his wife in their home.  Kennedy later named Reggie his Louisiana Campaign Manager. Reggie was elected a Democratic Party Presidential Elector in the Electoral College for the 1960 election. Shortly after taking office, President Kennedy sent Reggie as his Special Envoy to the Middle Eastern countries of Lebanon, Syria, Jordan, Saudi Arabia and Egypt. As a part of his mission, Reggie also met at the Vatican with Pope John XXIII to share observations concerning civil and religious affairs in those five countries.

Among his greatest contributions to state government, he became Chairman of the Louisiana Committee on Reorganization of the Executive Branch of state government, consolidating 356 state agencies into 19.  In 1983, his friend and fellow townsman from Crowley, Edwin Edwards, was re-elected governor.  Edwards named Reggie to lead the governor’s transition team, where Reggie oversaw all facets of the transition including all administration appointments.  He later served as Executive Counsel to the Governor. He was named Most Distinguished Young Democrat in Louisiana, and he was inducted into the Louisiana Political Hall of Fame

On the federal level he served on the Presidential Commission on the Status of Women and as the Director of the Title I Commission of the U.S. Higher Education Act. He was Louisiana Chairman of National Library Week and was Moderator of the National Library Week convention in Washington, D.C. He was a member of the Board of Selectors of the American Institute of Public Service.

In 1956, he stumped the state making political speeches for Earl K. Long who ran and was elected Governor of Louisiana.   In addition to heading John F. Kennedy’s Louisiana campaign, Reggie was Louisiana Campaign Manager when Robert F. Kennedy ran for president in 1968. He also worked on campaigns of Senator Ted Kennedy (who became his son-in-law). In the presidential campaign of 2008, he advised the Obama and Biden national campaigns.

He was a Regent of the American College of Mortgage Lawyers. He was a member of the Tulane Board of Administrators, the Board of Trustees of The Catholic University of America, Washington, D.C., and member of the Board of Trustees of the Williston Northampton School in Easthampton, Massachusetts. He was a Trustee of Notre Dame Seminary in New Orleans and St. Joseph Seminary College in St. Benedict, Louisiana and a Trustee of St. Mary’s School for Challenged Children in Shreveport, Louisiana.

With the naming of a Republican U.S. Attorney in 1981, the charm of Judge Reggie’s life took a turn. Within two days of taking office the new U.S. Attorney launched a wide investigation of Reggie that lasted for 10 years, followed by 2 years of trials. Reggie repeatedly claimed that he was being politically punished because of his strong leadership in Democratic Party affairs. The first trial ended with an acquittal on all counts.  In the second trial there was a conviction on one count and he paid a nominal fine. The presiding judge noted that Reggie did not enrich himself in any way from the matters alleged.

He continued his full-time practice of law and business interests.  Judge Reggie was a member of the Board of Directors of International Foundation for Education & Self-Help, a not-for-profit organization assisting citizens of 10 African countries. He served on the Advisory Board of the New Orleans Museum of Art. He was also a member of the American Academy of Political and Social Science, and the Louisiana Bar Foundation. He was a Fourth Degree Knight of Columbus and was a Papal Knight of the Equestrian Order of the Holy Sepulcher. He served as Chairman of Bishop’s Services Appeal and Chairman of the Committee on Corrections of the Louisiana Interchurch Council.

Reggie and his wife maintained their family home in Crowley until 2004 when they moved to Lafayette, his wife’s hometown. He became a member of the Lafayette Bar Association.  For more than 30 years, he and his wife have divided their time between their Louisiana home and their summer home on Nantucket Island, Massachusetts.  Private memorial services for Judge Reggie will be held on Nantucket at a future date.

While devoting time to many endeavors, Judge Reggie always considered his family to be the main calling in his life. He is survived by his wife Doris; his son Ed Michael Reggie of New York City and Miami Beach, and his daughter Kathryn and son-in-law Oliver Grantham and their sons Dashel and Bodhi Grantham; his daughter Victoria Reggie Kennedy of Boston and Washington, D.C. and her children Curran and Caroline Raclin; his son Denis Reggie of Atlanta and his daughter Katie and son-in-law Matt Werner, and son Drew Reggie; his son Gregory Reggie and his wife Terese of Crowley and their children, Mary Doris and Frem; his daughter Alicia Reggie Freysinger and her husband David Freysinger of Houston and their children, Scot and Michael; and his son Raymond Reggie of Mandeville and his children Christopher and Mary Catherine. He is also survived by his sister-in-law, Mrs. Samuel (Barbara) Reggie, his brother-in-law Tom LaHood, and numerous beloved nieces and nephews. He was preceded in death by his brothers Emile A. Reggie and Samuel J. Reggie, and his sister Yvonne Reggie LaHood. He was also preceded in death by his son-in-law, Senator Edward M. Kennedy.

Additional information may be found at www.reggiefamilyarchives.com

Words of comfort may be sent to the family at www.geeesey-ferguson.com