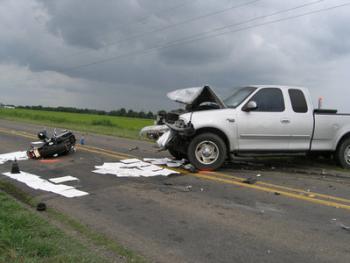 According to investigating troopers, on June 9, 2012, at 2:42 p.m., 46-year-old Robert Miller of Basile, was driving a 2002 Harley Davidson motorcycle west on LA 98 behind another vehicle. A 1999 Ford F-150 driven by 22-year-old Zachary Benoit of Crowley, was traveling east on LA 98 approaching Miller. Miller crossed the center, double yellow, no passing line and began to pass the other vehicle. While passing the other vehicle, Miller struck Benoit’s vehicle head-on.

Both Miller and his passenger, 43-year-old Vanessa Miller also of Basile, were ejected from the motorcycle. Troopers indicated both riders were wearing a helmet when the crash occurred. They were pronounced dead by the Acadia Parish Coroner. Benoit, who was wearing a seatbelt, was not injured in the crash.

It is unknown if impairment was a factor in this crash; however, routine toxicology samples have been obtained and will be submitted to the Louisiana State Police Crime Lab for analysis. This crash remains under investigation.

Harley Davidson motorcycle and a silver Ford truck along U.S. Highway 98 in Roberts Cove left two dead and others with minor injuries Saturday.

The accident remains under investigation.

More as it becomes available.