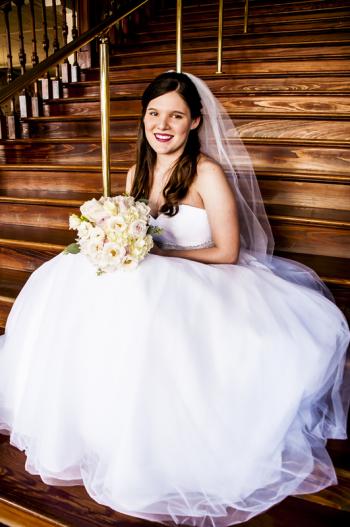 Emily Ann Barbier, daughter of Ruth and Charles Barbier of Crowley, and Taylor Michael Ducote, son of Elaine and Vince Ducote of New Iberia, were joined as husband and wife during a lovely evening ceremony at St. Michael the Archangel Catholic Church in Crowley on Saturday, Dec. 28, 2013.

The 6:30 p.m. nuptials were officiated by Fr. Mark Miley.

The bride is the granddaughter of Shirley Griffin of Crowley and the late Dr. James M. Griffin, and Bernice and Lou Barbier, also of Crowley.

The groom is the grandson of Gloria Saintes and the late Bennie Saintes, the late Elsie and Marvis Barras and Cookie and Bert Ducote, all of New Iberia. He is the great-great grandson of Mrs. Ivy Ortego of Ville Platte.

Emily is a 2008 graduate of Iota High School and a 2013 graduate of the University of Louisiana at Lafayette, where she earned a bachelor’s degree in general studies. She is presently employed in Lafayette as an administrative assistant at Macy’s, Acadiana Mall.

Taylor graduated from Catholic High School in New Iberia in 2008 before attending the University of Louisiana at Lafayette. He earned a bachelor’s degree in mathematics in 2012 and is currently there pursuing his master’s degree.

The church was decorated for the season, with large banks of red and white poinsettias setting a warm mood.

The bride, escorted to the altar by her father, was gorgeous in an Oleg Cassini ball gown of white tulle featuring a strapless sweetheart bodice of pleated chiffon. The gown’s waistline was embellished with an intricately beaded crystal belt, and a three quarter sleeve white chiffon jacket completed the bridal ensemble.

For her headpiece, Emily selected a scallop-edged waist-length veil adorned with crystal beads.

She carried a bouquet of white hydrangeas, blush garden roses and pink and cream spray roses hand-tied with a white ribbon.

Leela Johnson, niece of the bride and daughter of Catherine Johnson, was flower girl. She wore a white tulle ball gown with crystal embellishments at the waist and carried a miniature bouquet of hydrangeas and pink spray roses.

Wyatt Bonin, cousin of the groom and son of Misty and Farrell Bonin, served as ring bearer.

Following the wedding, family and friends of the newlywed couple enjoyed an evening of food and dancing at a reception in Le Grand Hall at the Grand Opera House in Crowley.

The hall was decorated with an abundance of fresh flower arrangements, including white hydrangeas blush garden roses and pink and cream spray roses. Tables were topped with large and small mercury glass candleholders containing warm, flickering votive candles. Special decorations included black and white wedding photographs of the bride and groom, along with similar wedding pictures of their parents and grandparents.

The bride’s cake was a four-tiered round white confection with butter cream frosting alternating in piped and smooth layers and topped with a spray of flowers. The layers were filled with strawberry, pineapple and buttercream.

The groom’s cake was a two-layer dark chocolate sheet cake made to represent a chalk board with mathematical equations on it, and hearts were used to represent love as a symbol in the equations.

On the evening prior to the wedding, the groom’s parents hosted a rehearsal dinner at Fezzo’s Restaurant in Crowley.

Following a wedding trip to Disney World and Universal Studios in Orlando, Fla., the couple is residing in Broussard.