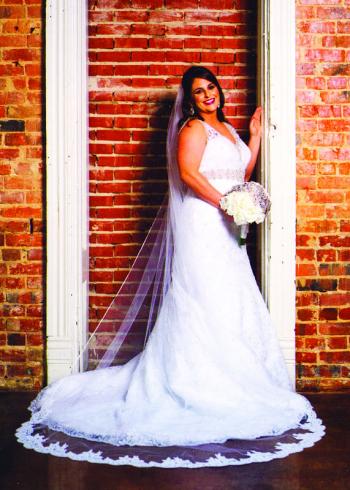 Christa Eileen Sellers of Houston, Texas, and Scott Alexander Dunlap II, also of Houston, were joyfully united in holy matrimony on the morning of Saturday, Jan. 17.

Christa graduated from Crowley High School before attending Louisiana State University, where she earned a  Bachelor of Arts degree in English.

Scott, who graduated from Destrehan High School before earning a Bachelor of Science degree in petroleum engineering from Louisiana State University, is employed by Sanchez Oil and Gas.

Guests were ushered to their seats by Lance Tannehill, Randy Roth and Mackenzie Owens, all friends of the groom.

Music for the ceremony was provided by pianist Barbara Marshall and vocalist Jacqueline McCarthy, cousin of the bride. Selections played by Marshall included “Jesu, Joy of Man’s Desiring,” “Canon in D,” “The Wedding March” and “Ode to Joy.” McCarthy sang “The Bridal Prayer,” “How Beautiful,” “Panis Angelicus,” the “Our Father” and “Ave Maria.”

Selected scriptures were read by Linsdey Puderer, friend of the bride, and John David Somme’, uncle of the groom.

Escorted to the altar by her father, the bride was beautiful in a full length gown featuring a trumpet silhouette. The sweetheart neckline was overlaid with a lustrous sheer embroidered V-neckline, and the fitted bodice and cascading skirt were embellished with intricately embroidered appliques incorporating seed pearls, beads and Swarovski crystals. The gown was defined with a bead-encrusted belt and finished with cloth-covered buttons, a scalloped hemline and cathedral length train.

Christa paired her gown with a cathedral length veil embellished with embroidered appliques and trimmed with a delicate ribbon edge.

The bride carried a unique bouquet of over two dozen white roses accented with a band of brooches that included a family heirloom from her great grandmother and was entwined with her mother’s sterling silver rosary.

The matron of honor carried a distinctive bouquet of white roses and blue orchids. The bridesmaids carried mixed bouquets of white spray and hybrid roses, blue delphiniums and green hydrangeas.

The groom selected his friend Andre Roques Jr. to serve as best man. Standing as groomsmen were Ryan Madre, Jonathan Peirce, Ryan Pepper and David Schexnaydre, all friends of the groom.

For her daughter’s wedding, the mother of the bride, the former Mary Luther, wore a navy blue floor length gown embellished with sequin appliques and a satin sash at the waist.

The mother of the groom, the former Catherine Somme’, chose an orchid-colored floor length gown with a sweetheart neckline, bead-embellished skirt and matching chiffon jacket.

Following the reception, family and friends joined the couple for a reception at Le Grand Hall located in the Grand Opera House in Crowley.

The hall was decorated with an abundance of beautiful floral arrangements that incorporated French tulips, anemones, calla lilies, hydrangeas, dendrobium orchids and roses. The doors of the reception hall were decorated with wreaths of baby’s breath, and the main staircase was an illuminated winter wonderland.

The guest sign-in table was decorated with a large floral design and framed wedding photographs of the bride’s and groom’s parents, along with an engagement photograph of the bride and groom.

The guest tables were topped with cobalt blue, green and clear vases filled with various flowers on delicate white lace doilies atop blue fabric medallions with scatterings of miniature pinecones.

The bride’s cake was made of four square almond-flavored tiers iced in dark ivory and decorated with intricate shimmering white appliques. The top layer was adorned with the bride and groom’s initials connected by a fleur de lis, and the second layer was encircled by a soft pink bow detail embellished with a brooch. The alternating layers contained mini-chocolate chip and almond fillings. The cake was served by Stacy Wayhan.

The bottom layer of the groom’s white cake was shaped like the state of Louisiana and contained fudge pecan filling. The top layer, shaped like a fleur de lis, was decorated with LSU and New Orleans Saints details and filled with white chocolate.

Guests danced to music provided by the New Orleans Jazz band Chicken on the Bone and had the opportunity to have souvenir pictures made in a photo booth. In addition to their photos, they departed with wedding favor playing cards that read, “A Lucky Pair.”

On the evening prior to the wedding, the groom’s parents hosted a rehearsal dinner at Ruffino’s on the River in Lafayette.

Following a wedding trip to Park City, Utah, the couple will reside in Houston.