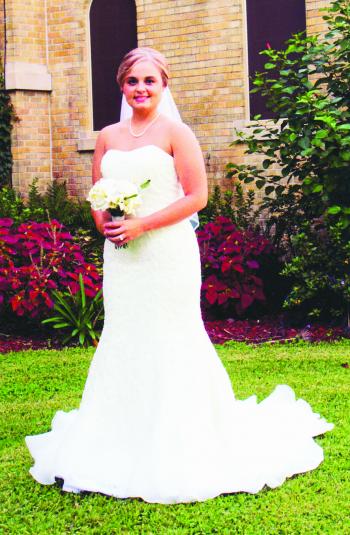 Against a holiday background of Christmas trees, poinsettias and twinkle lights at St. Joseph Roman Catholic Church, Shanna René Chiasson and Trevor Allen Meche were joined as husband and wife on Friday, Jan. 3, 2014, during a 7 p.m. Nuptial Mass.

The bride is the daughter of Todd and Melissa Chiasson of Rayne. Her grandparents are Deborah Ramsey of Lafayette, Patsy Chiasson of Rayne, and the late Wilbert Chiasson. She is a 2009 graduate of Rayne High School, 2012 graduate of Louisiana Technical College, and is employed by the Rayne Guest Home as an LPN/social services director.

The groom is the son of Jeffery and Mona Meche. His grandparents are Mr. and Mrs. Louis Meche Sr. of Rayne, and the late Raymond and Eunice A. Thevis of Rayne. He is a 2009 graduate of Rayne High School and is employed by Sterling Automotive Group.

Officiating the evening nuptials was Fr. Kendall Faulk, pastor, with Scriptures recited by Michelle Fusilier and Caroline Bergeron, friends of the couple.

Musical selections were provided by Amy Whatley, with gifts offered by Dina Bergeron and Melissa Meche, aunts of the groom.

On the arm of her father, the bride met her groom wearing a strapless Galina Signature designer wedding gown of soft white lave over charmeuse with soutache detailing. It featured beaded soutache floral details in rich texture and a sleek trumpet silhouette and chapel-length train. Her headpiece was a simple, yet elegant two-tier, fingertip-length veil of sheer tulle embellished with a beaded stitched edging with a double-row beaded hemline. She carried a bridal bouquet of white Escimo roses joined with white hydrangeas and calla lilies and a mixture of greenery accented with crystals and her grandmother’s rosary.

Attending the bride as maid of honor was Morgan Credeur, a friend.

Junior bridesmaid was Hailey Matte, cousin of the bride.

Bridal attendants each wore a strapless, floor-length dress of oasis-toned chiffon designed with a pleated bodice and completed with pearl accessories. Each carried a hand-held bouquet of gypsophila million star blooms, lily grass and ruscus.

Serving as flower girl was Tylee Alleman, godchild of the groom. She wore a floor-length dress of white satin designed with spaghetti straps and a pickup-styled full skirt while carrying a white satin basket filled with gypsophila million stars, lily grass and ruscus.

Attending the groom as best man was Mark Alleman, brother-in-law of the groom.

Groomsmen were Aaron Chiasson, brother of the bride; Travis Guidry, Brett Alleman and Brandon Dupuis, friends of the groom, and Dylan Bergeron, cousin of the groom.

Junior groomsman was Andrew Chiasson, brother of the bride.

Male attendants were donned in chocolate brown pin-striped tuxedos with oasis-toned ties and a rose boutonniere.

Ring bearer was Luke Moreaux, cousin of the bride. He also wore a chocolate brown pin-striped tuxedo with a white tie.

Ushering guests were Howard DeRouen III, godfather of the groom, and Louis “Beedo” Meche Jr., uncle of the groom.

For her daughter’s wedding, the bride’s mother, the former Melissa Falcon wore a floor-length champagne-toned dress designed with capped sleeves and a peplum detail at the waist in ivory.

The groom’s mother, the former Mona Thevis selected a Montage by Mon Cheri designs of platinum lace and chiffon detailed with a shirred bodice and embellished by floral embroidered appliques and sides gathered skirt with a front tapered streamer and floral design lace wide straps, leading to an A-lined skirt.

Immediately following the wedding ceremony, the newlyweds were honored during a reception held at the Rayne Civic Center. Guest tables held centerpieces of crystal vases filled with crystals and a touch of gold coloring and topped with floral arrangements in tones of copper, gold and brown.

Among the refreshments was the bride’s cake, a four-tier white confection with a variety of flavors decorated with draping fudge scrollwork and a brown satin ribbon topped with the letter “M.” The cake was served by Gina Moreaux, godmother of the bride.

The groom’s cake was a two-tier confection of almond buttercream and strawberry filling designed with a shadow grass camo covering, trimmed in purple and gold, and topped with a duck head with an LSU cap. The groom’s godmother, Patricia DeRouen served the cake.

Following a wedding trip to New York, the couple will reside in Rayne.

Prior to the wedding on Saturday, Dec 28, a rehearsal dinner was held at the home of the groom’s parents, who served as hosts for the evening.