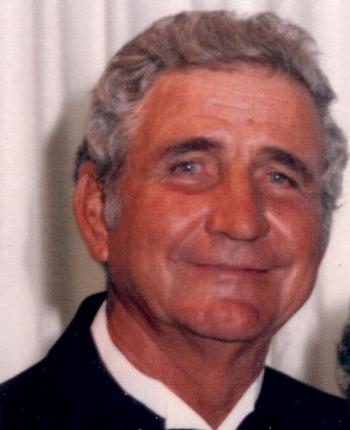 Branch –– Funeral services will be held on Thursday, January 8, 2015, at a 10:00 a.m. Mass of Christian Burial in St. Lawrence Catholic Church in Mowata,   for Anthony “Stoon” Francis Reiners, 81, who died on Tuesday, January 6, 2015, at his residence in Branch.
Interment will be in the St. Lawrence Catholic Cemetery, Mowata.
Reverend Mikel Polson, pastor of St. Michael Catholic Church of Crowley, will be the celebrant of the Funeral Mass and will conduct the funeral services. Reverend Joseph T. Sai Tran and Reverend Conley Bertrand will be the concelebrates. Lector will be Nick Simoneaux. Giftbearers will be Chris Habetz and Bridgid Guidry.
Survivors include his wife of 57 years, Pauline Habetz Reiners of Branch; one daughter, Charlotte Cope and husband, Lance, of Branch; two sons, Charles Reiners and wife, Shelly, of Branch and Pat Reiners and wife, Stephanie, of Crowley; and eight grandchildren, Cole Reiners, Clint Reiners, Jake Reiners, Hayden Reiners, Collin Reiners, Clay Cope, Britton Cope, and Andrew Cope.
He was preceded in death by parents, Frank Reiners and Marie Thevis Reiners; two brothers, Joe Reiners, Alois Reiners; and two sisters, Elizabeth Reiners, Helen Reiners Frey.
Mr. Reiners was a member of  St. Lawrence Holy Name Society in Mowata.
On any day of the week, at any given moment, one would have no trouble finding Mr. Reiners keeping himself busy.  How he kept himself busy can be described in a few simple, yet spectacular, words:  faith, family, friends, fervor, and farming. Faith-His faith was a driving force in all steps of his life, whether it was Perpetual Adoration, choir singing, or devoted prayer. Family-If someone wanted to learn how to be a devoted son, brother, uncle, husband, father, godfather, and grandfather, he/she could take a glimpse at Mr. Reiners’ life.  His dedication to every member of his family was evident in unique relationships that were second to none. Friends-Many people have had numerous conversations with him, only to walk away with a calm, light-heartedness.  His words held meaning, and his chuckles gave warmth. Fervor-He did so many things with passion and eagerness. He served our country with honor in the United States Army from 1955-1957, and he always spoke of his memories of Fort Sill, Oklahoma, with pride.  He served on the St. Michael and Notre Dame School Boards from the moment his first child entered St. Michael Elementary School to the moment his last child exited Notre Dame High School.  He advised others on countless topics with gentle advice gained from his experiences.  Also, he constantly gave encouraging words to his children and grandchildren to strive for their personal best in all things, which was evident in how he lived his life.  In addition, he knew how to relax, and he occasionally played the harmonica and sang for his family.  Finally, one of his favorite hobbies was listening to, viewing, and discussing sports, especially those that his grandchildren enjoyed, namely football, baseball, and basketball.   Farming-The fields of his farm life were the sunrise and sunset to each day of his life.  The pleasure he gained from the gift of farming was evident to all. He will be greatly missed.
A Rosary was recited on Wednesday, January 7, 2015, at 7:00 p.m. in Gossen Funeral Home, Rayne.
The family requested visiting hours be observed in Gossen Funeral Home, Rayne on Wednesday, January 7, 2015, from 4:00 p.m. to 8:30 p.m. and on Thursday, January 8, 2015. from 8:00 a.m. to 9:00 a.m.
The Reiners family would like to give a special thanks to all of Mr. Reiners’ caregivers, Dr. Katira, Dr. Leleux, Dr. May, Dr. Smith, Dr. Bowie, and Family Choice Hospice.
The family requested that donations could be made St. Lawrence Catholic Church in Mowata, St. Michael Elementary School in Crowley, Rayne Catholic Elementary in Rayne, and Notre Dame High School in Crowley.
Friends may view the obituary and guestbook online at www.gossenfuneralhome.net.
Arrangements have been entrusted to Gossen Funeral Home, Inc. of Rayne.