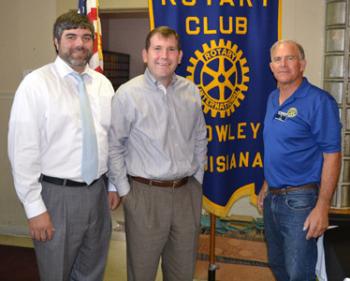 It was a long and interesting road that led Jason El Koubi to his position with the Lafayette Chamber of Commerce, but it’s nothing compared to what he has found out as he has begun listening to the community.

El Koubi, who was on hand in Crowley Tuesday to learn more about the area and speak with Rotarians and business leaders alike, has found out two main things since taking the president and CEO position Sept. 3 of this year: the business community wants the organization to provide it leadership and Acadiana needs to work together as a region.

The latter, while somewhat expected by El Koubi, has been expressed by more people than he could have imagined.

When El Koubi took over as president and CEO of the Lafayette Chamber, he explained to his board of directors he wanted to spend most of his first 100 days talking and listening to the community.

But, really, it isn’t all that shocking to El Koubi. As he pointed out to the Rotary Club of Crowley, Acadiana sends not only a delegation to the state Legislature every year, but has a Congressman that represents the area, so it would make sense for that area to band together.

So since it became a large theme of what the people of his community want, El Koubi has started reaching out to the surrounding communities to begin the dialogue toward finding solutions and banding together as Acadiana.

El Koubi did not become a Louisianan until he was about eight, when the self-described “military brat” moved with his family to Vernon Parish after his family was reassigned to Fort Polk.

Once he transferred to the Louisiana School for Math, Science, and the Arts, he began meeting people from across the state and heard of the great things Acadiana had to offer. He knew then that it was a special place. And after going to LSU, he fell even more in love with the area and learned more about it.

So after a career change, it isn’t overly shocking that he found his way to Lafayette for the next major chapter of his life.

In his first few weeks on the job, El Koubi’s attentions have been directed toward helping Acadiana band together, and as he visits other parishes in the region he continues to hear great things.

For now, however, as he explained to the Rotary Club of Crowley, he isn’t sure what the next most immediate step is, but feels candid discussions are the best course of action. Thus he opened the floor to questions to continue the dialogue.

Rotarians asked about joining forces with the Lake Charles region out of Southwest Louisiana and El Koubi explained that he believed it was important for the Acadiana piece of the puzzle to be completely together before talking about partnering up with Lake Charles. He pointed at how well the Lake Charles region as well as Baton Rouge and New Orleans regions were doing, and he hopes that the Acadiana region can be just as great.

He also discussed with Rotarians that while Acadiana’s growth over the next decade isn’t projected to be as high as some of the other regions in the state, he realizes that as those areas grow all areas will be strained for people, workers and resources, so banding together now is the perfect opportunity.